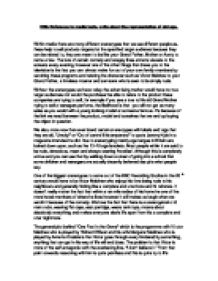 With Reference to media texts, write about the representation of old age.

With Reference to media texts, write about the representation of old age. Within media there are many different stereotypes that we see different people as, these help to sell products targeted at the specified target audience because they can be related to, they are meant to be like your Grand Father, Mother or Aunty to name a few. The lure of certain comedy and snappy lines attracts viewers to the screens every evening, however one of the other things that draws you to the television is the fact you can almost make fun out of your own family members by watching these programs and relating the character such as Victor Meldrew to your Grand Father, a timeless moaner and someone who is seen to be simply rude. Without the stereotypes we have today the advertising market would have no true target audiences nor would the purchaser be able to relate to the product these companies are trying to sell, for example if you see a true to life old Grand Mother trying to sell a teenagers perfume, the likelihood is that you will not get as many sales as you would with a young looking model or someone famous. ...read more.

The problem is that Victor is more of the self-antagonist with the everlasting line, "I don't believe it." From that point onwards reasoning with him is quite pointless and this is quite try to life because usually when you get an old person start talking about previous events or something that they do not like they will moan and groan about everything that has gone wrong and how they may be able to do the job so much better. This is Victor Meldrew down to the point. Even though this perpetual spiral of depressive behaviour applies greatly to Victor it does not apply to Margaret or most old people in today's day and age. More than often you also find that it is the male of the couple that's found to be the 'moaner' whereas the woman in the family is seen to be the soothing influence or someone that can calm the situation down. Yet another example of a stereotypical old person is 'Nan' from Catherine Tate's show. She always wears a nighty or a white dress which emphasizes the idea that since they don't have to go out anywhere they chose ...read more.

acts as a pull for people to watch the programme and again it is almost like mocking or taking the 'mick' out of someone within your family just by laughing and giggling at what the character is doing on the screen. We looked at two adverts which were completely different in meaning and selling completely different products: one was selling Aberdeen Angus beef for Waitrose supermarkets however the other advert was selling a health care product for L'OR�AL Paris with Jane Fonda on it, the Waitrose with a man who is portrayed to be a farmer with the usual overalls and barn in the background called Ron. The different between the adverts isn't subtle as you can see that the Face cream advert is much more glamorous with the vibrant colors and the way the composition is set out, however the Aberdeen Angus beef product advert shows Ron to be a much more quiet person looking out onto his heard of cows making sure that they are alright which shows a much more personal relationship with the food that we eat, better than just processed food from a factory. ?? ?? ?? ?? ...read more.