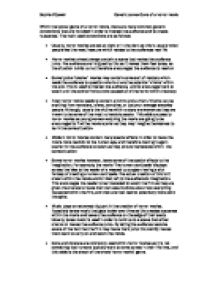 Within the typical genre of a horror movie, there are many common generic conventions that are included in order to interest the audience and to create suspense.

Within the typical genre of a horror movie, there are many common generic conventions that are included in order to interest the audience and to create 'suspense.' The main used conventions are as follows: * Usually, horror movies are set at night or in the dark as this is usually when people feel the most insecure which relates to the audiences real life * Horror movies almost always contain a scene that makes the audience jump. The audience are intrigued by this as it makes them feel tense, as the situation builds up but therefore encourages the audience to read on * Some typical 'slasher' movies may contain some sort of mystery which leads the audience to question who is or are the potential 'villains' within the plot. This is used to interest the audience, and to encourage them to watch until the end to find out who caused all of the horror within the story. * Every horror movie needs to contain a victim and a villain. ...read more.

By letting the audience become aware of the fact that the film may make them jump this weirdly makes them want to carry on and watch the movie. * Gore and violence are commonly used within horror movies as it is not something that humans typically want to come across in their life time, and this adds to the shock of the whole 'horror movie' genre. * A lot of more modern horror movies carry a physiological sense which provides the audience with a false sense of security. For example, the movie Physco shows a woman in a shower, which is usually a place where a woman would typically feel safe, but this security is taken away from her as she is stabbed to death within her shower. This shocks audiences, and encourages them to be scared that this may potentially happen to them. Movies like this may stick in human's minds after watching the movie, and even scare them afterwards when they are in the same situation. ...read more.

Later on, when Molly is displayed to be dying she sings the song in a slow and daunting way with the words altered which will intend to creep the audience out. This is also a false sense of security as the song is a well known happy song that represents Christmas time around the world. The slow pace that Molly is going to sing the song as may also stick in the audiences mind and make the movie have a lasting impression which shocks the audience. The end of the movie will be left to the audience's imagination as we are not actually going to display what happens to the character of Molly. This will leave the ending to the audience's imagination and will encourage them to think of more sick and vile thoughts that could have actually been created, which will create a bigger effect on the audience. This is also a typically known generic horror movie convention that is used widely throughout horror movies. ?? ?? ?? ?? Sophie Ottewell Generic conventions of a horror movie ...read more.