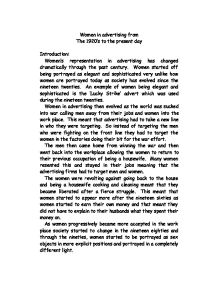 Women in advertising from The 1920's to the present day Introduction: Women's representation in advertising has changed dramatically through the past century. Women started off being portrayed as elegant and sophisticated very unlike how women are portrayed today as society has evolved since the nineteen twenties. An example of women being elegant and sophisticated is the 'Lucky Strike' advert which was used during the nineteen twenties. Women in advertising then evolved as the world was sucked into war calling men away from their jobs and women into the work place. This meant that advertising had to take a new line in who they were targeting. So instead of targeting the men who were fighting on the front line they had to target the women in the factories doing their bit for the war effort. The men then came home from winning the war and then went back into the workplace allowing the women to return to their previous occupation of being a housewife. Many women resented this and stayed in their jobs meaning that the advertising firms had to target men and women. The women were revolting against going back to the house and being a housewife cooking and cleaning meant that they became liberated after a fierce struggle. ...read more.

to purchase items without asking their husband for money, however most probably did not take that advantage or have enough money to pay for something they wanted. During the nineteen seventies advertising using women took off and has not stopped since then and never will as there are always different markets in which have advertising as the heart of their business. For example Yorkie launched a campaign involving a lorry driver and a stuck up woman in a soft-top convertible, which signifies that she is rich and that she is also a liberated woman. This woman is in the upper class, as she obviously could not afford a car like that unless she was upper class or married to somebody who is. The woman is around twenty-five to forty and most probably has no occupation or she is a film star for example. Some products portrayed women as the traditional housewife like 'Shake 'n' vac' does with their commercial. However the house used was fairly modern for the time as it had huge windows, which for the time were very modern and the furniture was better than the average shown in television programmes of the time, signifying a middle class house. However the woman in the advert is not middle class but she is portrayed as working class. ...read more.

Like the direct line car insurance advert for example, which used an over 40, middle class woman because it was the same age range as the advert was targeting. The majority of the adverts which use women without much on are normally found in magazines, which helps the producers to target their audience more effectively, also they have a fair idea of which age range may see them if in magazines instead of on the television. However this is not always the case because some companies may use channels on Sky or Digital which people have to pay for to watch, which again allows the advertisers much more accuracy in who they are targeting. Throughout the last century women in advertising has changed dramatically as well as the way in which advertising occurs through our daily routines. This is a change, which most probably will not stop. Women started off in the beginning of the century as being icons in which men aspired to have and who women aspired to be. Women then changed along with societies opinions and as wars were fought not just abroad but equality for women as well. This liberation led to women appearing more frequently in advertising and appearing more in the work place than they may have done twenty years before. I feel that women in advertising is a good thing because society is equal and therefore women are just as likely to purchase goods as much as men. ...read more.

This student has done well here in tackling what is quite a huge task! They show an excellent knowledge of cultural, social and historical features of advertising but needed to use more media language in the analysis.
****