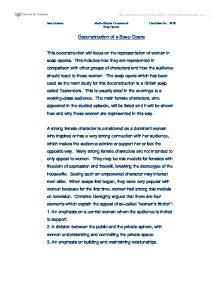 Deconstruction of a Soap Opera This deconstruction will focus on the representation of women in soap operas. This includes how they are represented in comparison with other groups of characters and how the audience should react to these women. The soap opera which has been used as the main study for this deconstruction is a British soap called Eastenders. This is usually aired in the evenings to a working-class audience. The main female characters, who appeared in the studied episode, will be listed and it will be shown how and why these women are represented in this way. A strong female character is considered as a dominant woman who inspires or has a very strong connection with her audience, which makes the audience admire or support her or feel the opposite way. Many strong female characters are not intended to only appeal to women. They may be role models for females with freedom of expression and freewill, breaking the stereotype of the housewife. Seeing such an empowered character may interest men alike. When soaps first began, they were very popular with women because for the first time, women had strong role models on television. Christine Geraghty argued that there are four elements which explain the appeal of so-called "women's friction": 1. An emphasis on a central woman whom the audience is invited to support. ...read more.

Peggy is represented as a prominent woman of a family and the society in Eastenders, of whom others feel the need to protect. Her supportive actions represent her as a respectable woman and therefore, a more commendable character. A younger 18-year-old female character, who breaks the stereotype of powerful people being just middle-aged men, is Ruby Allan; she is famous in the square for being Johnny Allan's daughter. Her father was arrested and eventually died, leaving Ruby with an inherited wealth and a big business at the Scarlet Bar, where she is the manager. Her prosperity in society has made her gain confidence over the years and an arrogance of power. In the scene where Ruby is conversing with Stacey's mum, there are sequences of close-up shots which illustrate Ruby's shock and expression to the abnormal behaviour of the woman. "You're crazy," Ruby says with a look of fear on her face after confronting her future mother-in-law. The editing used is clean cuts and several mid-shots are utilized to show the quick and building tension between the two characters. In this scene, Ruby is represented as an egoistic person, almost as if she does not want to associate herself with mentally ill people. In another scene, with Stacey and Ruby talking about Stacey's mum, Jean, there is a medium shot and low-key lighting. This shows the dark conflicting proximity between the two strong female characters and represents Ruby's domineering impression over Stacey. ...read more.

Stella is a character who is dating Phil Mitchell and is craving for the friendship of his son, Ben, in order to be accepted into the Mitchell family. There is a panning medium shot which sets the scene with a frame containing shiny cutlery to give the scene a "dream date" aspect and romantic setting. In conclusion, women in Eastenders are represented in various ways according to the character and their characteristics. Stronger and more dominant female characters, such as Pauline, Peggy, Ruby, Stacey and Jean have close-ups shots so that more attention is on them and their personalities. They are also included in scenes with low-key lighting to who the caution other characters should have when witnessing these female characters' reactions. The lighting also reveals the reassurance, comforting, fulfilment for companionship and influential atmosphere that these characters provide. The lighting also reflects their intense personalities and storylines. The minor female characters in the episode usually have mid-shots to not draw as much attention to them when they are in the frame. These characters seem to always be part of essential conversations and gossip that contribute to the plot of someone's storyline. These conversations involve many over-the-shoulder shots to portray the trustworthiness of these women. All women have family-based relationships and morals for family support. The family is seen as the private space and doesn't stir far away from what women were associated with in the past: family and the home. ?? ?? ?? ?? Jane Jimenez Media Studies Coursework Candidate No. : 4058 Soap Operas ...read more.