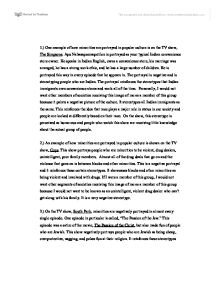 Portrayals of Minorities in pop culture

1.) One example of how minorities are portrayed in popular culture is on the TV show, The Simpsons. Apu Nahasapeemapetilon is portrayed as your typical Indian convenience store owner. He speaks in Indian English, owns a convenience store, his marriage was arranged, he has a strong work ethic, and he has a large number of children. He is portrayed this way in every episode that he appears in. The portrayal is negative and is stereotyping people who are Indian. The portrayal reinforces the stereotypes that Indian immigrants own convenience stores and work all of the time. Personally, I would not want other members of societies receiving this image of me as a member of this group because it paints a negative picture of the culture. It stereotypes all Indian immigrants as the same. This reinforces the idea that race plays a major role in status in our society and people are looked at differently based on their race. On the show, this stereotype is perceived as humorous and people who watch this show are receiving little knowledge about the actual group of people. 2.) An example of how minorities are portrayed in popular culture is shown on the TV show, Cops. ...read more.

All teenagers who live in California don't act this way, but they are portrayed as being like this. This portrayal can also be seen in newer shows such as Laguna Beach and The Hills. If I were a member of this group, I would not want other segments of societies receiving this image of me as a member of this group because I would not want to be seen as a rich snob who relies on their parent's money. I would want to just blend in with society. I feel that people who are white are sometimes given a higher status then people of other races. 6.) In the movie Soul Man, minorities are portrayed as having an easier time of getting into college. In this movie, a student who wants to get into a particularly difficult school dyes his skin a darker color so he can hopefully get in. This is a negative portrayal of minorities because it is saying that they have an easier chance of getting into college because they are a minority. It reinforces the stereotype that colleges have a certain quota to fill and that minorities sometimes do have an easier time getting into a certain college. ...read more.

Society may be more likely to link blacks with crime and violence because they still don't accept blacks as fully human. The fact that blacks are still being associated with apes is very distressing. Clearly, if I were in this group I would not want other members of society viewing me as "ape-like." It dehumanizes blacks and links them to negative actions such as crime. 10. Another example of how minorities are portrayed in the media is through a show called The Office. In one of the episodes, the main character Michael is forming a basketball team and he immediately recruits one of his employees named Stanley, because he is black. He automatically assumes that Stanley is good at basketball because he is black even though Stanley tries to tell him otherwise. However, Michael clings onto the stereotype that all blacks are good at basketball and in the end he is proved wrong. I do not think this is a good stereotype because you cannot group everybody that belongs to a certain race into one category. Not all blacks are going to be good at basketball, just like not all Asians are going to be smart. We develop pre-conceived notions about people based on their race, and it is not good. I would not want other members of society perceiving me in this way because the stereotype does not hold true for all blacks. ...read more.