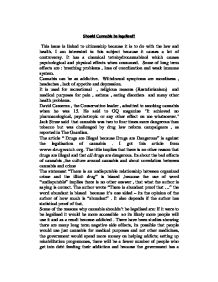 Should cannabis be legalised

Should Cannabis be legalised?

This issue is linked to citizenship because it is to do with the law and health. I am interested in this subject because it causes a lot of controversy. It has a chemical tetrahydrocannabinol which causes psychological and physical effects when consumed.  Some of long term effects are : breathing problems , loss of coordiantion and weak immune system.

Cannabis can be an addictive.  Withdrawal symptoms are moodiness , headaches , lack of appetite and depression.

It is used for recreational  , religious reasons (Rastafarianism)  and medical purposes for pain , asthma , eating disorders  and many other health problems.

David Cameron , the Conservative leader , admitted to smoking cannabis when he was 15. He said to GQ magazine "It achieved no pharmacological, psychotropic or any other effect on me whatsoever." Jack Straw said  that cannabis was two to four times more dangerous than tobacco but was challenged by drug law reform campaigners , as  reported in The Guardian.

The article “ Drugs are Illegal because Drugs are Dangerous” is against the legalisation of cannabis . I got this article from www.drugwatch.org. The title implies that there is no other reason that drugs are illegal and that all drugs are dangerous. Its about the bad effects of cannabis ,the culture around cannabis and about correlation between cannabis and crime

The statement “There is an undisputable relationship between organized crime and the illicit drug” is biased ,because the use of word “undisputable” implies there is no other answer , that what the author is saying is correct. The author wrote “There is abundant proof that …” the word abundant is biased  because it’s one sided – its the opinion of the author of how much is “abundant” . It also depends if the author has statistical proof of that.

Some of the reasons why cannabis shouldn’t be legalised are: If it were to be legalised it would be more accessible  so its likely more people will use it and as a result become addicted . There have been studies showing there are many long term negative side effects, its possible that people would use just cannabis for medical purposes and not other medicines, the government would spend more money on helping addicts; setting up rehabilitation programmes, there will be a fewer number of people who get into debt feeding their addiction and because the government has a responsibility of protecting its citizens from the harms caused by cannabis.

The article I studied about pro legalisation of cannabis was from  http://www.lca-uk.org. The opening sentence is “It is beyond dispute that cannabis prohibition has been a social…….disaster” this is biased because the author is not  taking into account that there are people who  don’t consider that the prohibition is a disaster , the words “it is” imply that what the author is saying is true.

The sentence “Cannabis legalization would directly improve the lives of us all” is biased because there is no proof that all our lives would be improved. The author is implying that it’s a fact and not their opinion. Some people do not believe this is the case.

Reasons for the legalisation of cannabis are: we would reduce the number of people going to overcrowded prisons , reduce number of crimes associated with cannabis , stop the black market , people who use the drug for medicinal purposes, will have  access to it. also because selling it as medicine can raise government income .

The first article uses a lot of imperatives, facts , figures , it has quite a serious tone. The 2nd which is pro legalisation has a lot of exaggeration, it doesn’t have as many statistics as the other one , its more straight to the point ;its tone is of urgency.

If cannabis was legalised money that is  spent on  attempting to decrease the  number of people consuming cannabis illegally would be reduced , the police would be targeting more dangerous criminals, it would be easier for people to ask for help about their addiction  because they wouldn’t fear getting in trouble and also because people have the right to practise their religion ( Buddhism , Rastafarianism) .It was reported on the BBC news website since The Netherlands legalised cannabis in the 1970 usage of heroin declined.  This counters the argument that cannabis is the “gateway” to more dangerous drugs.

I believe cannabis shouldn’t be legalised , if it was it  would send the wrong message to people , that it’s safe when it has negative long term effects. Also because from what I have seen people who consume c, later begin to consume more dangerous drugs such as heroin. There are long term negative effects on the body from using cannabis.  Buying cannabis wastes money which could be spent on more worthwhile things such as education . There will be an increase in people using the drug so there will be more rehabilitation programs which taxpayers and the government will have to pay for. Lastly because I believe the government has a duty to protect its people from the harms of drugs, and the crime gangs behind the black market of drugs.