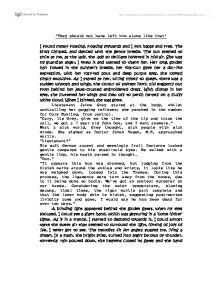 They shouldnt have left him alone story beginning

'They should not have left him alone like that' I found myself floating, floating skywards and I felt happy and free. The birds chirped, and danced with the gentle breeze. The sun seemed to smile at me, as the lady, the lady so delicate hovered in mid-air. She was my guardian angel; I knew it and wanted to thank her. Her long, golden hair flowed in the summer's breeze, her kiss-curl gave her a doll-like expression, with her rosy-red pout and deep purple eyes, she looked simply exquisite. As I stared at her, willing myself to speak, there was a sudden whoosh and wings, the colour of softest ivory, slid elegantly out from behind her jewel-crusted embroidered dress. With dismay in her eyes, she fluttered her wings and flew off to perch herself on a fluffy white cloud. When I blinked, she was gone. Lieutenant Jaime Grey stared at the body, whilst controlling her gagging reflexes; she punched in the number for Cory Bunting, from control. "Cory, its Grey, give me the time of the tip and trace the call, we got a 7 year old John Doe, and I want answers." ...read more.

As if in a trance, I started to descend towards it, I could almost taste the sweet air that seemed to surround the light, hinting of joys of life, I never got to see. The melodies fit for angels swayed me, living a dream. In a flash, the bright skies, turned into angry bellows of thunder, torrential rain poured down, the heavens closed its gates and the hand that was to give me eternal peace and happiness, lurched forward to give me a shove, off the cloud and down, down towards darkness. My thoughts floated skyward, like bubbles in the wind. Lieutenant Jaime Grey sat with her chin in her hands, contemplating whether to have her sixth cup of coffee; this current case was proving to be a lot more tiring and difficult than it had first appeared. It was concluded that the boy was a homicide case, but not a single piece of trace evidence has been found, fingerprints, fibres, smudges, chemicals, materials, nothing, the boy was clean. ...read more.

Framing the eyes, were semi-circular, scholar glasses, perched meticulously on her pixie-like nose. The starched shirt, underneath the burgundy, checked pinafore, looked white as snow, despite the blood-stained neck. My brain registered shock when I recalled the number of years she had mentioned. "F-f-f-forty years? You can't be more than twelve!" "I have not crossed yet...I can not until someone finds out who murdered me and my mama is at peace." "So, you are saying that until they find out who killed me I am stuck here." She nodded sincerely. "He ate a note?" "Yepp." Lieutenant Grey opened her eyes in astonishment; it would never have occurred to her just how intelligent a seven year old could be. "Spit it out, what did it say?" "It said...All alone with him...Black...Bread...Caine Taylor." Vagen repeated systematically, "It was recovered at the bottom of the stomach, along with yeast and iron scrapings." A riddle, she could deal with that, Jaime thought. "Good God, he was one smart boy, Caine Taylor, we know that much. He that he was left alone, and because he was alone, he died. They should not have left him alone like that." ?? ?? ?? ?? ...read more.