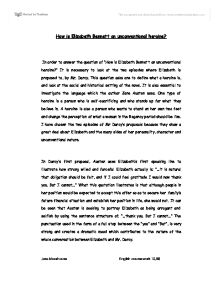 How is Elizabeth Bennett an unconventional heroine?

How is Elizabeth Bennett an unconventional heroine? In order to answer the question of "How is Elizabeth Bennett an unconventional heroine?" It is necessary to look at the two episodes where Elizabeth is proposed to, by Mr. Darcy. This question asks one to define what a heroine is, and look at the social and historical setting of the novel. It is also essential to investigate the language which the author Jane Austen uses. One type of heroine is a person who is self-sacrificing and who stands up for what they believe in. A heroine is also a person who wants to stand on her own two feet and change the perception of what a woman in the Regency period should be like. I have chosen the two episodes of Mr Darcy's proposals because they show a great deal about Elizabeth and the many sides of her personality, character and unconventional nature. In Darcy's first proposal, Austen uses Elizabeth's first speaking line to illustrate how strong willed and forceful Elizabeth actually is; "...it is natural that obligation should be felt, and if I could feel gratitude I would now thank you. ...read more.

Secondly, we are presented with another compelling sentence created by Austen to illustrate another of Elizabeth's aspects to her personality which is the fact that she is very bold with her feelings and very outspoken judgements and she wears her heart on her sleeve; "why with... design of offending...me, you choose to tell me...you liked me against your will..." Elizabeth wonders why Darcy told her he liked her even against his own better judgement i.e., he gives the impression that he didn't want to like her but he did. As a direct consequence Elizabeth was arrogant towards him by saying that his intentions were to insult and be offensive to her, and this shows her to be very unconventional as females of this period would be expected not to show such individual views, but rather be appreciative of the offer made by Mr. Darcy and to accept it. In another side to her character, in the passage; "ruining, perhaps forever, the happiness of a most beloved sister?" Elizabeth shows a more conventional caring side to her character as she displays her self-sacrificing nature. ...read more.

Darcy. It could be interpreted by the reader to be a definitive answer in that she states categorically that she would never marry him. Considering the question of "How is Elizabeth Bennett an unconventional heroine?" We can see that Elizabeth is an unconventional heroine because she challenges expectations and stereotypes. Furthermore she is comfortable in expressing her own opinions in an age in which this was not expected of a female. She also, very unconventionally, refuses Mr. Darcy's offer of marriage, which would have been viewed by most people as a very attractive offer considering his status and wealth. Elizabeth refuses to conform because she believes strongly that she should be her own person and be very honest in her beliefs and judgements of people. She is also a rule breaker, illustrated by not wishing to be seen as a stereotypical woman in the Regency period. Finally, and very unusual in a female of this era, Elizabeth appears to be comfortable with conflict and is prepared to challenge widely held beliefs. All of this information demonstrates the views of the author, for example Austen doesn't want to conform to popular belief about women in the Regency period. ?? ?? ?? ?? Jess Moorhouse English coursework 10JBS ...read more.

This student written piece of work is one of many that can be found in our GCSE French section.