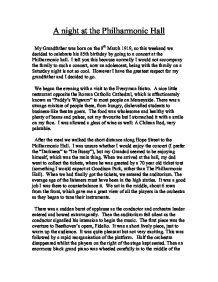 A night at the Philharmonic Hall.

A night at the Philharmonic Hall My Grandfather was born on the 8th March 1919, so this weekend we decided to celebrate his 85th birthday by going to a concert at the Philharmonic hall. I tell you this because normally I would not accompany the family to such a concert, now an adolescent, being with the family on a Saturday night is not so cool. However I have the greatest respect for my grandfather and I decided to go. We began the evening with a visit to the Everyman Bistro. A nice little restaurant opposite the Roman Catholic Cathedral, which is affectionately known as "Paddy's Wigwam" to most people on Merseyside. There was a strange mixture of people there, from hungry, dishevelled students to business-like theatre goers. The food was wholesome and healthy with plenty of beans and pulses, not my favourite but I stomached it with a smile on my face. ...read more.

There was a sudden burst of applause as the conductor and orchestra leader entered and bowed extravagantly. Then the auditorium fell silent as the conductor signalled his intension to begin the music. The first piece was the overture to Beethoven's opera, Fidelio. It was a short lively piece, just to warm up the audience. It was quite pleasant but not very exciting. This was followed by a rapid reorganisation of the platform. Half the orchestra disappeared whilst the players on the right of the stage kept seated. Then an enormous black grand piano was wheeled carefully in to the middle of the stage. What followed was the most exciting part of the evening, when pianist, Lors Voorts, played Beethoven's Emperor Concerto. His skilful hands glided over the keys producing a most magnificent sound. It was so delicate and intricate, yet powerful and mesmorsing. The composer was also very animated (his head banging would have gone down well at a Black Sabbath concert). ...read more.

I read in the programme that the orchestra would now be playing a piece by a composer called Schumann, who I had never heard of. This piece was split into 4 and it seemed to be extremely hard work for the orchestra, especially the string section. However despite their hard work I did not enjoy this piece nearly as much as the Beethoven. The lady next to me didn't seem too happy about me popping mint imperials into my mouth either. Perhaps she would have liked one. I did wonder whether I should offer her the packet but decided against it, which was probably a wise decision. The music seemed a little disjointed and jerky to me, but most people seemed to like it and at the end of the concert the audience gave another very generous round of applause. After the concert we walked back along Hope Street to the car. I had enjoyed the concert much more than I expected I would, and as glad I had gone. ...read more.