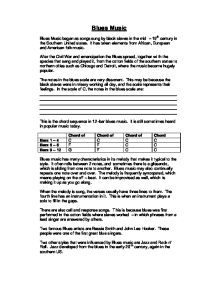 Blues Music Blues Music began as songs sung by black slaves in the mid - 19th century in the Southern United states. It has taken elements from African, European and American folk music. After the Civil War and emancipation the Blues spread, together with the species that sang and played it, from the cotton fields of the southern states to northern cities such as Chicago and Detroit, where the music became hugely popular. The notes in the blues scale are very dissonant. ...read more.

It is still sometimes heard in popular music today. Chord of Chord of Chord of Chord Bars 1 - 4 C C C C Bars 5 - 8 F F C C Bars 9 - 12 G F C C Blues music has many characteristics in its melody that makes it typical to the style. It often rolls between 2 notes, and sometimes there is a glissando, which is sliding from one note to another. ...read more.

This is when an instrument plays a solo to fill in the gaps. There are also call and response songs. This is because blues was first performed in the cotton fields where slaves worked - in which phrases from a lead singer are answered by others. Two famous Blues artists are Bessie Smith and John Lee Hooker. These people were one of the first great blue singers. Two other styles that were influenced by Blues music are Jazz and Rock n' Roll. Jazz developed from the blues in the early 20th century, again in the southern US. ...read more.

This essay is a clear and brief description of blues. It includes a number of the main features and talks about the 12 bar blues chord pattern. The writer could have discussed what types of instruments were used to play blues music.