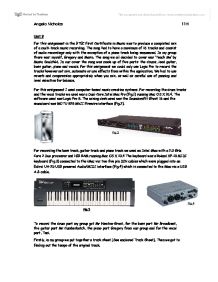 Unit 9 For this assignment in the BTEC First Certificate in Music was to produce a completed mix of a multi-track music recording. The song had to have a maximum of 16 tracks and consist of audio recordings only with the exception of a piano track being sequenced. In my group there was: myself, Gregory and Mario. The song we all decided to cover was 'Teach Me' by Musiq Soulchild. In our cover the song was made up of five parts: the drums, lead guitar, bass guitar, piano and vocals. For this assignment we could only use Logic Pro to record the tracks however not mix, automate or use effects from within the application. We had to use reverb and compression appropriately when you mix, as well as careful use of panning and level selection for balance. For this assignment I used computer-based music creation systems. For recording the drum tracks and the vocal tracks we used was a Dual-Core Intel Mac Pro (Fig.1) running Mac OS X 10.4. The software used was Logic Pro 8. The mixing desk used was the Soundcraftt Ghost 16 and the soundcard was MOTU 828 MkII Firewire interface (Fig.2). For recording the bass track, guitar track and piano track we used an Intel iMac with a 2.0 GHz Core 2 Duo processor and 1GB RAM running Mac OS X 10.4 The keyboard was a Roland XP-10 MIDI keyboard (Fig.3) ...read more.

It only took one take and we had completed the initial drum track. Next, we mixed down. We were not satisfied with the sound of the kick drum. We had to use the mixing desk and in order to do so we had to change the outputs of the tracks in Logic to go back into the mixing desk. This meant for example, to mix down the over heads which were in stereo, we changed the both tracks to 'Output 3-4' then on the mixing desk, selected the 'Rev' button (Fig.1) so the signal could pass back in. We repeated the procedure for the other tracks we had recorded changing the outputs to '5-6' 7-8' etc. During the mix down procedure an example would be the kick drum. It sounded too much like a 'click' so we increased the low frequencies and reduced the high frequencies until we had a better sound. We decided to add compression on the track as this was required. For this we used the Behringer Tube Composer T1952 Processor (Fig.1). To add the compression, we used the patch bay with two balanced cables with 1/4" phone plugs. One of the cables ends was plugged into '3' on the top row and '24' on the top row of the second part of the bay. We repeated this with another cable however this time on the bottom rows. ...read more.

This was all we had time for during that session and Tenny was not available any other times so we had to repeat the first verse for the second and just copy the chorus for the send time. We did not have any vocals during the bridge. We found that some vocal parts were louder than others so we had to mix down. WE repeated the same procedure as for mixing the drum tracks and we adjusted the levels of each track until we were satisfied and also compressed all the vocals. Finally we recorded the piano part. To record the bass part we started the Logic Pro 8 application, set the core audio driver to the UA-25 Audio/MIDI interface and restarted the application. First we created one new software instrument track and then selected the EXS24 sampler and used the 'Grand Piano' sample. Gregory then began playing the verse for one bar and then we looped it until the end of the verse. Next was the chorus which we copied for the chorus the second time around and then finally the bridge and outro was recorded. We copied this Logic project to the Audio drive where we dragged the recorded piano part into the Logic save with the other tracks. We were now ready to bounce it to an AIFF. I selected the bounce option in Logic and selected AIFF as the file format and checked joint-stereo. The bit-rate was 2116kbps. When this was complete I burnt the file to a CD. ?? ?? ?? ?? Angelo Nicholas 11H ...read more.