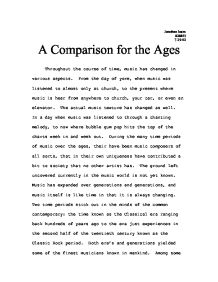 Comparison for the Ages

Jonathan Iosim 828833 7-29-02 A Comparison for the Ages Throughout the course of time, music has changed in various aspects. From the day of yore, when music was listened to almost only at church, to the present where music is hear from anywhere to church, your car, or even an elevator. The actual music texture has changed as well. In a day when music was listened to through a chanting melody, to now where bubble gum pop hits the top of the charts week in and week out. During the many time periods of music over the ages, their have been music composers of all sorts, that in their own uniqueness have contributed a bit to society that no other artist has. The ground left uncovered currently in the music world is not yet known. Music has expanded over generations and generations, and music itself is like time in that it is always changing. Two time periods stick out in the minds of the common contemporary: the time known as the Classical era ranging back hundreds of years ago to the era just experiences in the second half of the twentieth century known as the Classic Rock period. ...read more.

Perhaps the most famous symphony that he composed was his fifth, and almost everyone recognizes it after the very first bar. James Marshal Hendrix was born in Seattle, Washington, on November 27, 1942. Hendrix was of African American, European, Cherokee Indian and Mexican descent. An unsettled home environment made Hendrix spend much of his early years staying with his grandmother, a full-blooded Cherokee Indian, in Canada. His mother died when he was twelve years of age. After his mother's death he became very interested in music and got his first electric guitar. The electric guitar would be the instrument that would change Hendrix for the rest of his life. In High School at the age of sixteen he was allegedly kicked out for holding the hand of a Caucasian girl. At seventeen he joined the arm, and was a paratrooper for fourteen months. After a sever injury, Hendrix was discharged from the army and began to try and pursue a musical career. In 1965 Hendrix formed the band that was eventually called Jimmy James and the Blue Flames. They worked the Village clubs five days a week. Hendrix was soon after recognized by many famous musicians, and before he knew it former Animals bassist Chas Chandler. ...read more.

However, the fans applauded in delight and thus guitar smashing became a big hit, no pun intended. Jimmi Hendrix did a lot of drugs that stimulated his creative side, and some of his most famous songs were written under such circumstances. While it is said Beethoven died from a common cold, a folk legend argues he was caught in a hail storm and died from the cold straight on. Jimmi Hendrix's death remains somewhat of a mystery, as many famous musicians seem to follow this trend. His death was any combination of overdosing to being purposely ovderdosed by a colleague of his. Hendrix and Beethoven alike, contributed infinitely numbers of inspiration for their fellow generations. Both men are forever remembered in music, and even though they will never go down in history together...they still share many common bonds along the way. Heavy metal rock and Classical music doesn't have the same ring to it, but both are major parts of music history. I don't think one can compare what they would rather listen to between "Voodoo Child" and Beethoven's 5th Symphony. In both senses of their legacies left upon society today, both Hendrix and Beethoven struggled through their lives to achieve their ultimate goals, and eventually they did just that, and in the process they were remembered for it. ...read more.