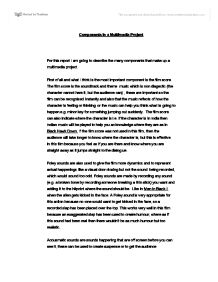 Components in a Multimedia Project

Components in a Multimedia Project For this report I am going to describe the many components that make up a multimedia project. First of all and what I think is the most important component is the film score. The film score is the soundtrack and theme music which is non diagectic (the character cannot here it, but the audience can), these are important so the film can be recognised instantly and also that the music reflects of how the character is feeling or thinking or the music can help you think what is going to happen e.g. minor key for something jumping out suddenly. The film score can also indicate where the character is i.e. if the character is in India then Indian music will be played to help you acknowledge where they are as in Black Hawk Down. If the film score was not used in this film, then the audience will take longer to know where the character is, but this is effective in this film because you feel as if you are there and know where you are straight away as it jumps straight to the dialogue. ...read more.

a car crashing outside then the character rushing out to see what has happened, while you the audience, is wondering what has happened before you can see. For example in Men in Black II spaceships are heard before they appear. This can be very effective because if the sounds come in as soon as the object is seen then this can seem a lot less realistic, so acousmatic sounds are used because you don't always see things as they happen but you hear then see. Diagetic sounds is like a radio is playing, when the character DOES hear it as well as the audience, this will make the film seem more to life as there isn't just talking but background music as well, for example in Black Hawk Down where the Elvis Presley song is played via radio. If this song hadn't have been playing then there wouldn't be an atmosphere so this works very well in this part of the film when every one is together having a good time. ...read more.

Although not having a buzz track can create an eery atmosphere. Tempo and the style/genre of music can affect the audience and to help them by changing the tempo according to where the actor is e.g. London - fast music will be played to represent the rushing town life with fast English music, and in Black Hawk Down, a song by Elvis was played to represent the American soldiers in a happy mood. At the begging of Edward Scissor Hands, there were orchestral instruments playing to help the fairy tale story come to life. Anthropomorphism is where animals are humanized to create humour like in MIB II the dog talks to Jay. This is done by some one recording an actor/actress speaking the dialogue and being put together by a sound engineer to the hitpoints of every word the dog is imitating or vice versa. This can be very effective because if the dog hadn't talked then there wouldn't be any humour, and would be less boring throughout the film. ...read more.