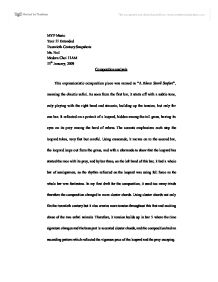 This expressionistic composition piece was named as “A Káosz Szerű Szafari”, meaning the chaotic safari. As seen from the first bar, it starts off with a subtle tone, only playing with the right hand and staccato, building up the tension, but only for one bar. It reflected on a portrait of a leopard, hidden among the tall grass, having its eyes on its prey among the herd of zebras. The accents emphasizes each step the leopard takes, very fast but careful. Using crescendo, it moves on to the second bar, the leopard leaps out from the grass, and with a sforzando to show that the leopard has started the race with its prey, and by bar three, on the left hand of this bar, it had a whole bar of semiquavers, so the rhythm reflected on the leopard was using full force as the whole bar was fortissimo. In my first draft for the composition, it used too many triads therefore the composition changed to more cluster chords. Using cluster chords not only fits the twentieth century but it also creates more tension throughout this fast and exciting chase of the two safari animals. Therefore, it tension builds up in bar 5 where the time signature changes and the bass part is accented cluster chords, and the composition had an ascending pattern which reflected the vigorous pace of the leopard and the prey escaping.

The tension continues to rise as the time signatures constantly changes in bar 6 to bar 8, creating different pace in each bar, the dynamics also changes constantly to make the piece sound nervous. From bar 9 to bar to bar 11, the dynamics shows that it’s softer, going from pianissimo to mezzo piano. Showing that the prey had managed to hide, making the atmosphere less tense. However, the catch is on in bar 12 again when the notes on the right hand goes from treble clef to the bass clef, contrasting the variation between the notes. It portray the scene of a chase in the mountain, using high to low notes and this melody expresses where the leopard and the prey goes up and down, with this texture, it immediately lets the tension back again. In bar 13, the dynamic is fortissimo and the notes here goes up and down, as if its all over the place, meaning the prey has been caught by the leopard and is struggling hard to fight for its own lift. In bar 14, the dynamic without any transition changes to a sudden piano, which expresses the prey using its last strength to climb up. The staccato clearly reflects on the careful steps the leopard is taking in order to claim its prize.

The last bar starts off with another time signature, and builds from pianissimo with subtle staccatos and with a trill, the last chord, revealing the tonal centre and using forte fortissimo and an accent for the last chord, and reflects to the scene when the prey dies under the last bite of the leopard. Overall, this expressionistic piece focuses on the dynamics and the time signatures to create the sense of excitement and tension for a chase in the chaotic safari.

The composer here has clearly understood how to create a piece of expressionist music. They have accurately described the use of a number of techniques that are regularly used in 20th century music. The writer should just be clear about what volume the different dynamics are as they have quoted them inaccurately in the essay.