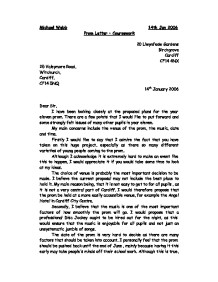 Dear Sir, I have been looking closely at the proposed plans for the year eleven prom. There are a few points that I would like to put forward and some strongly felt issues of many other pupils in year eleven

Michael Webb 14th Jan 2006 Prom Letter - Coursework 20 Llwynfedw Gardens Birchgrove Cardiff CF14 4NX 25 Valeymore Road, Witchurch, Cardiff, CF14 5NQ 14th January 2006 Dear Sir, I have been looking closely at the proposed plans for the year eleven prom. There are a few points that I would like to put forward and some strongly felt issues of many other pupils in year eleven. My main concerns include the venue of the prom, the music, date and time. Firstly I would like to say that I admire the fact that you have taken on this huge project, especially as there so many different varieties of young people coming to the prom. Although I acknowledge it is extremely hard to make an event like this to happen, I would appreciate it if you would take some time to look at my ideas. ...read more.

I personally feel that the prom should be pushed back until the end of June, mainly because having it this early may take people's minds off their school work. Although this is true, in June the GCSE's have just finished and some pupils' priorities may not have been on their exams but on the prom. Taking into account such things as, how closely the prom is to the GCSE's and that many pupils don't see the prom as a real leaving party. I would strongly advise pushing back the date of the prom to early July. Moving on I would like to draw your attention to the time of the prom. This is very hard to decide on but I would just like to mention that after the prom many pupils will need to have access to safe transport home. ...read more.

As there is no smoking allowed in the hotel another exit must be provided for a dedicated smoking area thus jeopardising the safety of the other pupils. With the safety of pupils again in mind I would stand by your decision not to allow people from other schools to attend the prom. This is a school prom for the pupils of Corpus Christi and should not be open to people unknown to the school, where the authority of Corpus Christi staff could be questioned. On the subject of drink I am sure I do not need to mention that the consumption of alcohol is prohibited as all pupils are under the age of eighteen, although I would propose that breathalyzers be issued to the security staff just in case a pupil must be denied access due to alcohol. Finally I would like to wish you the best of luck and I am sure that the prom will be a huge success. Yours faithfully, Mike Webb ...read more.