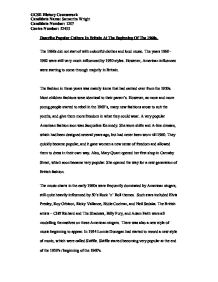 Describe Popular Culture In Britain At The Beginning Of The 1960s.

Describe Popular Culture In Britain At The Beginning Of The 1960s. The 1960s did not start of with colourful clothes and loud music. The years 1960-1962 were still very much influenced by 1950 styles. However, American influences were starting to come through majorly in Britain. The fashion in these years was mainly items that had carried over from the 1950s. Most children fashions were identical to their parent's. However, as more and more young people started to rebel in the 1960's, many new fashions arose to suit the youths, and give them more freedom in what they could wear. A very popular American fashion icon was Jacqueline Kennedy. ...read more.

Such stars included Elvis Presley, Roy Orbison, Ricky Vallance, Eddie Cochran, and Neil Sedaka. The British artists - Cliff Richard and The Shadows, Billy Fury, and Adam Faith were all modelling themselves on these American singers. There was also a new style of music beginning to appear. In 1954 Lonnie Donegan had started to record a new style of music, which were called Skiffle. Skiffle started becoming very popular at the end of the 1950's / beginning of the 1960's. TV also started to become very popular as the young people had more leisure time. Some of the new shows appearing included 'Coronation Street', and 'The Avengers'. ...read more.

This alos made people think more about politics and changed the way people thought. The British film industry was in decline. Most films in the cinema were American, such as 'West Side Story' and 'Psycho'. In 1960, something new came to cinemas: the 'Carry On' films. They showed a different and new British humour, which people had never seen in films before. In conclusion, Britain's popular culture in the early 1960s was a mix of American influences and remaining styles from the1950's. However, changes were just beginning to develop. Britain was starting starting to pull away from America, and create a new popular culture and era of its own. GCSE History Coursework Candidate Name: Samantha Wright Candidate Number: 1207 Centre Number: 52433 ...read more.