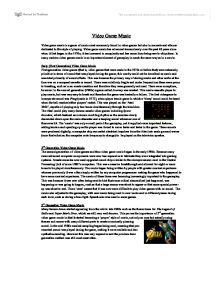 Video Game Music Video game music is a genre of music most commonly found in video games but also in concerts and albums dedicated to this style of playing. Video game music has advanced tremendously over the past 40 years since when it first began in the 1970s; it has increased in complexity and has come from being rare to ubiquitous. In many modern video games music is an important element of gameplay in much the same way as in a movie. Early (First Generation) Video Game Music First-generation video games (that is, video games that were made in the 1970s or before that) were extremely primitive in terms of sound that was played during the game; this mostly could not be described as music and consisted primarily of sound effects. This was because the primary way of storing music and other audio at the time was on a compact cassette or record. These were relatively fragile and under frequent use these were prone to breaking, such as in an arcade machine and therefore they were generally not used. There were exceptions, however: in the second generation (1980s) a game called Journey was created. This used a cassette player to play music, but was very easy to break and therefore the game was basically a failure. ...read more.

Speech also was used in some games. 3rd Generation Video Game Music Many famous tunes started appearing from the mid to late 1980s such as the theme tunes for The Legend of Zelda and Super Mario Bros. which are still very well-known. This proves the importance of 3rd generation video game music in that it started becoming a 'proper' style of music, not only as cues but actually using themes and scores with many different parts to create a musically pleasing sound. In the mid 1980s musical sampling began being used, meaning that pre-recorded sound was played during the game, making it more realistic and less synthetic-sounding. However this was very expensive and the previous tone generation method was still used most often. 4th Generation Video Game Music During the late 1980s consoles were commonly using ten channels (tones) for producing music and it was now also available to play in stereo format rather than mono for a more authentic sound. They were also often using sampling and ADSR effects (commonly found in synthesizers) for increased realism. 4th Generation music included improved versions all the previous successful elements of video game music in a; it used speech more often, music was more fun to listen to and could affects the mood and style of the game and was also important in knowing when a significant event was about to occur. ...read more.

In which the main character, Pikachu, was controlled by issuing voice commands. Modern Day Video Game Music From 2000 till 2010, video game music has become increasingly often fully orchestrated and mostly using voice dialogue rather than text. Video game music has become the focus of some concerts, especially in Japan. It is a very well-known form of music because it is a small but memorable part of most people's lives, and there are many sites dedicated to video game music such as vgmusic.com. Video game music albums and soundtracks are commonly released for popular games. Video game music is a vital part of most games, changing the mood, creating tension and supplying necessary cues. General Characteristics of Video Game Music * If the player stays in the same place the music should loop and not stop, therefore if it is designed well it will go from the end to the beginning smoothly and unnoticeably and feel as if it is an ongoing piece of music with no end rather than a recorded track looping over and over again (unless during a music game in which the music will usually be continually changing). * Often video game music does not include lyrics, however it is not uncommon for video games to include soundtracks that would not be considered as video game music, such as pop and rock songs. * Older music will sound more electric whilst newer music will often be fully orchestrated ?? ?? ?? ?? ...read more.