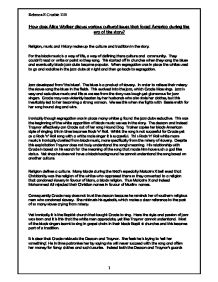 How does Alice Walker discuss various cultural issues that faced America during the era of the story?

How does Alice Walker discuss various cultural issues that faced America during the era of the story? Religion, music and history make up the culture and tradition in the story. For the black music is a way of life, a way of defining there culture and community. They couldn't read or write or paint so they sang. This started off in churches when they sang the blues and eventually black jazz clubs became popular. When segregation was in place the whites used to go and socialize in the jazz clubs at night and then go back to segregation. Jazz developed from 'the blues'. The blues is a product of slavery. In order to relieve their misery the slaves sang the blues in the fields. This evolved into the jazz, which Gracie Mae sings. Jazz is sexy and seductive music and life as we see from the story was tough yet glamorous for jazz singers. Gracie may was violently beaten by her husbands who also stole her clothes, but this inevitably led to her becoming a strong woman. We see this when she fights with Bessie smith for her song hound dog and wins. Ironically though segregation was in place many whites g found the jazz clubs seductive. ...read more.

Indeed both the Deacon and Traynor's guards reminded her on the Klu Klux Klan who still posed a threat at this time. Simple references to them indicate just how powerful and notorious they would be to her audience. Clearly JT and Horace have a problem with white men since they leave the room. This reflects the idea that they have been conditioned since slavery, to feel inferior to white men and are not even comfortable around them in their own homes. Yet Traynor is not racist and the developing relationship shows the persistence of equality between them. Traynor indeed develops a mother son relationship with Gracie; he hugs her physically and buys her many presents. In time she calls him 'son' suggesting "they are all their sons" and this harks back to the period of slavery when black women were mother figures to the white children. History played a part in the culture and tradition, especially due to slavery and segregation. Blacks had always been known as slaves and the reputation and way they were treated wasn't going to suddenly change. When slavery was less of an occurrence and more blacks were free, segregation became part of the way of life, as the whites were not willing to mix with the blacks. ...read more.

They want to become famous but this is not always a good thing as it led to Elvis and others like him having a sad and wasted life. They are in theory making gods to worship but this isn't necessary as there are more important things in life. Gracie Mae understands this and does not approve of Traynor's screaming fans. Related to this is the stories reference to the consumerist boom in the 1950's. In order to build up the country the American dream became liable to goods and structure. Even Gracie Mae as a TV and Traynor has access to mass consumption of goods. Indeed as a product himself his fans in turn consume him. Although it may not seem it, Gracie is in fact politically aware. The 1960's entry to death, with a list of deaths of individuals, vital to the civil rights cause. That she places Malcolm X first is significant. Clearly she supported his more aggressive stance. Martin Luther King is referred to simply as the 'King' indicating his importance to everyone. Their deaths were both so important to her culture that she feels she cannot express the grief she feels about their loss. In conclusion the story 1955 deals with the painful and distant history that goes into making up the complex American dream. Rebecca E Crosbie 11B 1 ...read more.