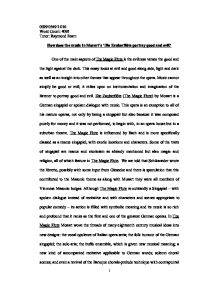 How does the music in Mozart's 'Die Zauberfl&amp;ouml;te portray good and evil?

0099 0549 2 016 Word Count: 4095 Tutor: Raymond Fearn How does the music in Mozart's 'Die Zauberfl�te portray good and evil? One of the main aspects of The Magic Flute is the evilness verses the good and the light against the dark. This essay looks at evil and good along side, light and dark as well as an insight into other themes that appear throughout the opera. Music cannot simply be good or evil; it relies upon on instrumentation and imagination of the listener to portray good and evil. Die Zauberfl�te (The Magic Flute) by Mozart is a German singspiel or spoken dialogue with music. This opera is an exception to all of his mature operas, not only by being a singspiel but also because it was composed purely for money and it was not performed, to begin with, in an opera house but in a suburban theatre. The Magic Flute is influenced by Bach and is more specifically classed as a rescue singspiel, with exotic locations and characters. Some of the traits of singspiel are rescue and exoticism as already mentioned but also magic and religion, all of which feature in The Magic Flute. We are told that Schikaneder wrote the libretto, possibly with some input from Giesecke and there is speculation that this contributed to the Masonic theme as along with Mozart they were all members of Viennese Masonic lodges. Although The Magic Flute is outwardly a Singspiel - with spoken dialogue instead of recitative and with characters and scenes appropriate to popular comedy - its action is filled with symbolic meaning and its music is so rich and profound that it ranks as the first and one of the greatest German operas. In The Magic Flute Mozart wove the threads of many eighteenth century musical ideas into new designs: the vocal opulence of Italian opera seria; the folk humour of the German singspiel; the solo aria; the buffo ensemble, which is given new musical meaning; a new kind of ...read more.

When the Queen leaves after explaining the situation to Tamino she exits to the sound of thunder, giving the audience a slight peep at what she really is. The Queen of the Night's aria is a piece that musically as well as dramatically is of operatic deception. It suggests no evil throughout its deeply touching first section to the second part that is more pleading and virtuosic. 'The introduction to the Queen's first recitative might perhaps be considered descriptive, and there is certainly an unmistakable piece of scene painting at the end of the opera when she flies in terror at the 'ungeheures Getose' (monster) which as in Goethe's 'Faust' announces the approaching sun'.10 A drum roll signifies the entrance of the Queen of the Night, when she returns to sing her next aria in act two. The Queen of the Night sings an opera seria aria - one of vengeance. It begins in a minor key, changes to major and then returns to the minor. The whole aria is based around G minor, which is generally known as a tragic key when composers use it. The Queen of the Night's second aria is a complete contrast to her first aria in act one. It is often compared to the 'mad aria' by Donazetti. There are several wide leaps which are characteristic of a vengeance aria. Again, we hear fantastic use of coloratura with the Queen this time reaching a high F, higher than the 'unnatural' D in the first aria. By starting in a minor key and going through the changes already mention the Queen is eliciting sympathy although she is not successful. The use of brass is significant in this aria. Mozart scores timpani and trumpets which are significant with vengeance and death arias. 'Evil of a more formidable kind is conveyed by the Queen of the Night's second aria (No 14: Der H�lle Rache kocht in meinem Herzen), a brilliant 'revenge aria' of the old opera seria types, in which the ...read more.

This shows the audience that they are triumphant and have succeeded in beating the evil and the dark. To create the metaphoric darkness needed throughout the opera, the use of veils are used so that the audience can still see the characters but it is customary for veils to represent darkness or shadows. As mentioned at the beginning of the essay, the number three is emphasised throughout the essay and with the sevenfold sun and initiation rites these symbolise the Masonic theme in the opera. The magic Flute, as I have already mentioned, is a moralistic opera yet it is the three ladies at the very beginning who actually hint at the first moral as being about brotherhood and love, which by the end of the opera appears false as they are connected to the Queen of the Night and are subsequently evil. It is mainly Sarastro and the priests that convey the morals to the audience throughout the opera. It is by the end of act one that the ambiguity has been resolved and the audience is on Sarastro's side and throughout the Finale the text contains many morals, some religious yet the one that is outlined the most is simply that 'true love will prevail'. The most prominent key that Mozart used in The Magic Flute, and also in most of his Masonic works, is E flat major along with its relative minor of C. The nature of The Magic Flute can suggest that it has a simple beginning yet managed to turn into a great opera. Mozart has drawn on resources and influences that freemasonry had given him and also music that he knew, even his own pieces, were an inspiration to him. At the end of the opera Sarastro moralises 'The rays of sun vanquish the night/and destroy the ill-gained power of the hypocrites.' This sums up all that I have discussed between light and dark, good and evil and the trickery that the Queen of the Night employs. ...read more.