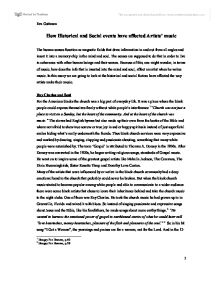 How Historical and Social Events have affected Artists' Music

How Historical and Social events have affected Artists' music The human senses function as magnetic fields that draw information in and out from all angles and insert it into a memory chip in the mind and soul. The senses are supposed to do that in order to live in coherence with other human beings and their senses. Because of this, one might wonder, in terms of music, how does the info that is inserted into the mind and soul, affect an artist when he writes music. In this essay we are going to look at the historical and social factors have affected the way artists make their music. Ray Charles and Soul For the American blacks the church was a big part of everyday life. It was a place where the black people could express themselves freely without white people's interference 1"Church was not just a place to visit on a Sunday, but the heart of the community. And at the heart of the church was music." The slaves had English hymns but also made up their own from the books of the Bible and where not afraid to show true sorrow or true joy in sad or happy spirituals instead of just superficial smiles hiding what's really underneath the facade. Thus black church services were very expressive and marked by dancing, singing, clapping and passionate shouting, something that many white people were astonished by. The term 'Gospel' is attributed to Thomas A. Dorsey in the 1930s. After Dorsey was converted in the 1920s, he began writing religious songs, standards of Gospel music. He went on to inspire some of the greatest gospel artists like Mahalia Jackson, The Caravans, The Dixie Hummingbirds, Sister Rosetta Tharp and Dorothy Love Coates. Many of the artists that were influenced by or active in the black church community had a deep emotional bond to the church that probably could never be broken. ...read more.

The Civil Rights Movement and Joan Baez 8"A new grass roots civil rights movement emerged in 1960 when a wave of sit-ins by young blacks challenged segregation across the South." It all started with four black youngsters from North Carolina sitting down in a white only area of a Woolworths department store lunch counter. The young men kept sitting even though they did not get served and several others joined in them in different parts of the country, even young whites from the north joined in as well. Things were starting to stir among the blacks in America. With the freedom riders and organisations like NAACP(The National Association for the advancement of Coloured People and SCLC(Southern Christian Leadership Conference and the election of George Wallace, who strongly supported segregation, as governor of Alabama, the struggle over civil rights intensified. In August, 1963, Martin Luther King led a march on Washington with over 200.000 followers and had his famous "I have a dream" speech. It was the largest gathering Washington had ever seen. And there where several white folk artists supporting Martin Luther King on this campaign, like for instance Bob Dylan, Peter, Paul and Mary and Pete Seeger. And as in religion, music became important in the civil rights movement in that it created a sense of unity and it was about singing together joining in on songs like "we shall overcome" that became the official anthem for the movement. 13"I say to you, today, my friends, so even though we face the difficulties of today and tomorrow, I still have a dream. It is a dream deeply rooted in the American dream. I have a dream that one day this nation will rise up and live out the true meaning of its creed-we hold these truths to be self-evident, that all men are created equal." Martin Luther's dream is well on its way to become true. ...read more.

People started calling it flower power and a childlike behaviour was a part of it. In 1967 Paul McCartney, said: 12"The need today is for people to come to their senses and my point is that LSD can help them. We all know what we would like to see in the world today-peace. We want to be able to get on with each other. I believe the drug could heal the world... I now believe the answer to everything is love." Other artists in the Psychedelic movement were The Grateful Dead, The Doors, 13th Floor Elevators and Jefferson Airplane. With Airplane's song "White Rabbit" they gave a tribute to the drug and the encouraged people to "feed your head." Short Conclusion In this assignment we have definetly seen that historical and social issues have affected the artists that have gone before us and maybe it is even possible to conclude that one can not completely distance oneself from ones upbringing and all the aspects of life and society that have affected an artist in their young life stays with them and paints a picture inside that will then be transcribed down to music. We have seen how black church music inspired Ray Charles to virtually start a new genre called soul, mixing the church music with blues and taking it to a wider audience. And Bob Marley who had grown up with rastafarianism took his belief with him everywhere he went and wrote music inspired by it. Joan Baez who got inspired to speak up about human rights and peace when the civil rights movements escalated, the historical things that happened fired up inside of her an even bigger passion for protest against injustice and singing about the happenings around her. And how drugs can turn music around and suddenly take an artist to a different level of songwriting and behaving. All these people and many others with them used their senses to channelize the emotions and happenings around them into their music. They were affected and inspired by Social and Historical happenings. ...read more.