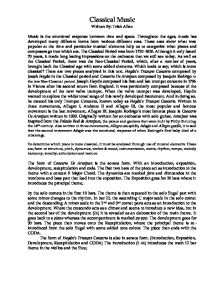 Classical Music Written By: Trish Allan Music is the emotional response between time and space. Throughout the ages, music has developed many different forms from various different eras. These eras show what was popular at the time and particular musical elements help us to categorize what pieces and composers go into which era. The Classical Period was from 1720-1820. Although it only lasted 70 years, it made long lasting impressions on the orchestra that we still see today. As well as the Classical Period, there was the Neo-Classical Period, which, after a number of years, brought back the Classical age with some added elements. Which leads to say; which is more classical? There are two pieces analyzed in this text. Haydn's Trumpet Concerto composed by Joseph Haydn in the Classical period and Concerto De Aranjuez composed by Joaquin Rodrigo in the late Neo-Classical period. Joseph Haydn composed his first and last trumpet concerto in 1796 in Vienna after his second return from England. It was particularly composed because of the development of the new valve trumpet. When the valve trumpet was developed, Haydn wanted to explore the wider tonal range of this newly developed instrument. And in doing so, he created his only Trumpet Concerto, known today as Haydn's Trumpet Concerto. Written in three movements, Allegro I, Andante II and Allegro III, the most popular and famous movement is the last movement, Allegro III. ...read more.

Ending with a strong ff fanfare by the Trumpets and the French Horn and a C Minor chord with a G bass as the final chord. The use of sonata form in the classical period was mainly used towards the end of the Classical period and into the Romantic Period, although it was still used in the classical era. Given that both pieces are in sonata form we can't tell the difference by the use of form if it is from the classical period. The pitch within the piece Concerto De Aranjuez varies throughout the parts. In the bass line the pitch is quite low, to the Eb Soprano Cornet line where it plays an octave above everyone else at the main motive (two semiquavers followed by a quaver). In Haydn's Trumpet Concerto Haydn wanted to explore the wide range of the newly developed keyed trumpet. So he wrote the piece inside the instruments range and capability (2 octaves). While exploring the techniques that the trumpet could produce, he pushed it to allegro semiquaver runs (which lead to double tonguing) and octave jumps. Dynamics within both pieces rage from ppp-fff. Terraced dynamics are used within each piece. When the solo instrument is playing the main melody, the other instruments accompanying it are marked p-pp. In Aranjuez, it uses crescendos to lead up to the climaxes and to add emotion to the piece. The crescendo is also used to build up to a thicker texture and to f-fff. ...read more.