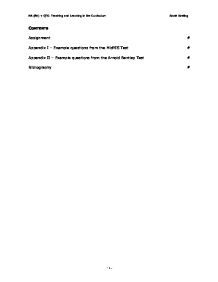 Identify ONE teaching and learning issue, with a curriculum focus, which has been of significance to you in you induction year. Discuss this issue drawing upon the relevant academic and professional literature and your induction experiences to support you

CONTENTS Assignment # Appendix I - Example questions from the MidYIS Test # Appendix II - Example questions from the Arnold Bentley Test # Bibliography # ASSIGNMENT: Identify ONE teaching and learning issue, with a curriculum focus, which has been of significance to you in you induction year. Discuss this issue drawing upon the relevant academic and professional literature and your induction experiences to support your discussion. (5000 words) INTRODUCTION This essay is an exploration into the relevance of MidYIS tests as a predictor for results at GCSE Music. A comparison will be made between two sets of skills: those assessed by the MidYIS test - taken by most children in England at the beginning of year 9 - and those which, according to exam boards and experienced music educators, are tested at GCSE. Certain fundamental skills required for success at GCSE Music cannot be tested in the MidYIS tests, and I would suggest that a combination of MidYIS-type testing, musical intelligence assessment and some measure of the amount and quality of musical experience gained before embarking on the GCSE course would serve as a much more relevant indicator of likely success, and a more appropriate baseline from which to measure value added. ...read more.

In response to a query about this, Professor Carol Fitz-Gibbon wrote: When we have GCSE results in August 2000, we will be doing a special study to see whether we need to use different combinations of the MidYIS sub-test to give predictions for each GCSE result. However, the expected outcome of this is that the total score, using all the sub-tests will provide the best prediction. This is what we would expect from theory and we have found this to be borne out in practice. For example, the best predictor of French at A level is not French at GCSE, but the average GCSE grade that students achieve"6. In effect this acknowledges the fact that the MidYIS test is, in fact, an indicator of general intelligence, rather than an assessment of the skills needed for different subjects. But the performance and composition of music fundamentally involve the effective manipulation of sound, and the only auditory component of the MidYIS test is the fact that pupils have to listen to the questions. MIDYIS PREDICTOR GRAPHS Figure 1 Figure 2 Figures 1 and 2 show the line of best fit for a scatter graph of Year 9 MidYIS scores in the academic year 1998/99 against those pupils GCSE Music scores in 2001 (here an '8' at GCSE denotes an A* grade, 7 an A, 6 a B and so on). ...read more.