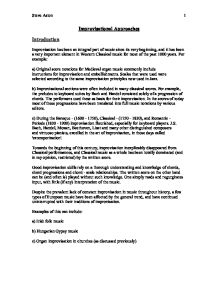 Improvisational Approaches Introduction Improvisation has been an integral part of music since its very beginning, and it has been a very important element in Western Classical music for most of the past 1000 years. For example: a) Original score notations for Medieval organ music commonly include instructions for improvisation and embellishments. Scales that were used were selected according to the same improvisation principles now used in Jazz. b) Improvisational sections were often included in many classical scores. For example, the preludes to keyboard suites by Bach and Handel consisted solely of a progression of chords. The performers used these as basis for their improvisation. In the scores of today most of these progressions have been translated into full music notations by various editors. c) During the Baroque - (1600 - 1750), Classical - (1750 - 1830), and Romantic - Periods (1830 - 1900) improvisation flourished, especially for keyboard players. J.S. Bach, Handel, Mozart, Beethoven, Liszt and many other distinguished composers and virtuoso pianists, excelled in the art of improvisation, in those days called 'extemporization'. Towards the beginning of this century, improvisation inexplicably disappeared from Classical performances, and Classical music as a whole has been totally dominated (and in my opinion, restricted) by the written score. Good improvisation skills rely on a thorough understanding and knowledge of chords, chord progressions and chord - scale relationships. ...read more.

As with jazz, I found it difficult to immediately play lines I could hear in my head. As I became more confident I could play new lines more instinctively and I really felt as thought I could express myself through the music. I found melodic improvisation extremely easy compared to the other assignments. With the other modules, I could always 'hear' the lines but was sometimes unable to play them, which I found very frustrating. However, when improvising vocally, I did not have to think where certain notes were or use particular 'shapes' - I could just sing whatever line I could hear. I have been improvising melodically for a long time. I have Irish grandparents who taught me a lot of Irish folk songs when I was small and these involve a lot of melodic improvisation both vocally and instrumentally, so I have been exposed to melodic improvisation from a young age. Also, when writing my own songs I generally start with a chord sequence and write a melody line using vocal improvisation until I find a line I really like. I can hear harmonies fairly easily, which was also helpful. Although I found this melodic vocal improvisation the easiest of the modules, I believe I actually improved a lot more in the jazz and blues modules as I found them both difficult to start with but very enjoyable by the time we were assessed. 1 Steve Aston ...read more.