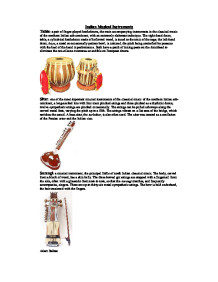 Indian Musical Instruments Tabla: a pair of finger-played kettledrums, the main accompanying instruments in the classical music of the northern Indian sub-continent, with an extremely elaborate technique. The right-hand drum, tabla, a cylindrical kettledrum made of hollowed wood, is tuned to the tonic of the raga; the left-hand drum, baya, a metal or occasionally pottery bowl, is untuned, the pitch being controlled by pressure with the heel of the hand in performance. ...read more.

Sitar: one of the most important musical instruments of the classical music of the northern Indian sub-continent, a long-necked lute with four main plucked strings and three plucked as a rhythmic drone; twelve sympathetic strings are plucked occasionally. The strings can be pulled sideways along the curved metal frets, varying the pitch up to a fifth. ...read more.

Sarangi: a musical instrument, the principal fiddle of north Indian classical music. The body, carved from a block of wood, has a skin belly. The three bowed gut strings are stopped with a fingernail from the side, often with a glissando from note to note, so that the sarangi matches, and frequently accompanies, singers. There are up to thirty-six metal sympathetic strings. The bow is held underhand, the hair tensioned with the fingers. Adam Balkan ?? ?? ?? ?? ...read more.

This is a clear and accurate description of 3 Classical Indian instruments.