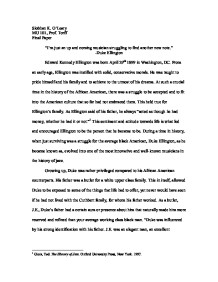 Siobhan K. O'Leary MU 101, Prof. Torff Final Paper "I'm just an up and coming musician struggling to find another new note." -Duke Ellington Edward Kennedy Ellington was born April 29th 1899 in Washington, DC. From an early age, Ellington was instilled with solid, conservative morals. He was taught to pride himself and his family and to achieve to the utmost of his dreams. At such a crucial time in the history of the African American, there was a struggle to be accepted and to fit into the American culture that so far had not embraced them. This held true for Ellington's family. As Ellington said of his father, he always "acted as though he had money, whether he had it or not."1 This sentiment and attitude towards life is what led and encouraged Ellington to be the person that he became to be. During a time in history, when just surviving was a struggle for the average black American, Duke Ellington, as he became known as, evolved into one of the most innovative and well-known musicians in the history of jazz. Growing up, Duke was rather privileged compared to his African American counterparts. His father was a butler for a white upper class family. This in itself, allowed Duke to be exposed to some of the things that life had to offer, yet never would have seen if he had not lived with the Cuthbert family, for whom his father worked. ...read more.

Renaissance, black people at last found prominent Afro-American figures in all areas of culture and the performing arts they could look up to...For Ellington the experience would be a defining one....With it came the realization that New York, and more particularly Harlem, was where his destiny lay." 9 The Harlem Renaissance, as it was later called, was the pinnacle of Ellington's career. Not only was there are market for Ellington's music, but there was a culture and style of people whom embraced not only Ellington's music and jazz, but every aspect of African American culture. As Ellington stated during the heart of this amazing time, " The music of my race is something more than the American idiom. It is the result of our transplantation to American soil, and was our reaction in the plantation days to the tyranny we endured. What we could not say openly, we expressed in music, and what we know as "jazz" is something more than just dance music..."10 Ellington was extremely committed to the advancement of the African American population. What Ellington was engaging in was not just an occupation, and not just a musical revolution, it was something more than that. For the first time in their lives, blacks were being recognized for their advancement and contribution to American culture. ...read more.

As one of his counterparts also explained, "Duke studied his men. He studied their style, how they maneuver with their music, with their playing and everything. And he keeps that in his mind so if he wrote anything for you; it fit you like a glove."16 Duke Ellington was a magnificent and proliferate musician, both for his time and still today. Through his gift for arranging and composing rich pieces of music with intricate chord changes and melodic harmonies, all tailored to fit the artist whom was playing them, Ellington made a lasting impression on the jazz world. He embraced his black culture and the struggle to overcome and combat racial and prejudice which existed. He used his culture to his advantage, in order to illustrate and convey a style of music so original, it would not have been accepted any other way. By using jungle music as a front for exposing his unique and original compositions, and portraying them as the down South Negro, stereotype, he was able to infiltrate a new, original form of jazz never before heard. Ellington's gift for being able to compose multiple tunes and arrangements made him to be the legend, as he is known today. Duke Ellington has made a lasting impression on the jazz world, creating tactics and styles that would help to evolve the jazz music world and continues to be used. ...read more.