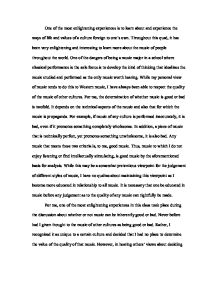 Listening to and learning about the music of other cultures (and sub-cultures).

One of the most enlightening experiences is to learn about and experience the ways of life and values of a culture foreign to one's own. Throughout this quad, it has been very enlightening and interesting to learn more about the music of people throughout the world. One of the dangers of being a music major in a school where classical performance is the sole focus is to develop the kind of thinking that idealizes the music studied and performed as the only music worth hearing. While my personal view of music tends to do this to Western music, I have always been able to respect the quality of the music of other cultures. For me, the determination of whether music is good or bad is twofold. It depends on the technical aspects of the music and also that for which the music is propaganda. For example, if music of any culture is performed inaccurately, it is bad, even if it promotes something completely wholesome. ...read more.

In this instance, the discussion about music seemed to be just the crust of the discussion and the filling was how the standards discussed apply to our lives as Christians. Another enlightening exercise in this class was reading the passages from Ronin Ro's Gangsta Rap: Merchandising Rhymes of Violence. Having never been a fan of rap music, and having gone so far as to denounce rap as having no musical substance, I naturally began to read the selections with a bias. As I read, I began to realize that although rap comes from a section of Western civilization and culture, it is in its own way the music of a sub-culture. With a better understanding of the differences in lifestyles between the culture in which I live and the culture in which rap music prevails, I find myself battling a desire to resort to pure relativism to judge the quality of music. ...read more.

This narrator is an example of the close mindedness that is such a danger to one who has been trained and educated in the classical music of a culture. The greatest insight I have gained through listening to and learning about the music of other cultures (and sub-cultures) and also learning more about those other cultures is that the approach to music when determining quality must be one of openness, but openness within a set of guidelines. Much like Gordon's motto of "Freedom within a framework of faith," an adequate analysis and judgement of music requires musical education in the culture from to instill the technical requirements of good music. Also, in that same vein of thinking, there must also be the willingness to remove one's self from any emotional attachment with the music to be analyzed. Throughout this quad, I have come to realize the relative value of music to the cultures from which it comes, and also that there are certain universal standards to which music must be held if one is to determine the quality of such music. ...read more.