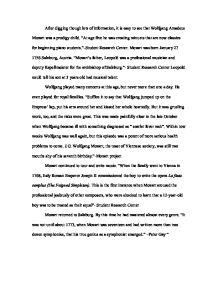 Mozart. After digging though lots of information, it is easy to see that Wolfgang Amadeus Mozart was a prodigy child

After digging though lots of information, it is easy to see that Wolfgang Amadeus Mozart was a prodigy child. "At age five he was creating minuets that are now classics for beginning piano students."-Student Research Center. Mozart was born January 27 1756 Salzburg, Austria. "Mozart's father, Leopold was a professional musician and deputy Kapellmeister for the archbishop of Salzburg."- Student Research Center Leopold could tell his son at 3 years old had musical talent. Wolfgang played many concerts at this age, but never more than one a day. He even played for royal families. "Suffice it to say that Wolfgang jumped up on the Empress' lap, put his arm around her and kissed her whole heartedly. ...read more.

By this time he had mastered almost every genre. "It was not until about 1773, when Mozart was seventeen and had written more than two dozen symphonies, that his true genius as a symphonist emerged." -Peter Gay " "Mozart hoped for an appointment at a royal court. Instead, the new Archbishop of Salzburg, Hieronymus, Count of Colloredo, employed him as a new musician. Hoping to excite new interest in his son's work, Leopold sent Wolfgang on a tour with his mother. In Paris, however, Mozart did not succeed in reviving his former popularity. The trip ended in tragedy when his mother, Anna Maria, became sick and died. Wolfgang returned to Salzburg in 1779."- Student Research Center "The Archbishop persisted in thwarting his plans for elaborate compositions. ...read more.

Their first surviving son, Carl Thomas Maria, was born in 1784. This addition to the family would make money even tighter. In 1790 Mozart was commissioned to compose the operas La clemenza di Tito (The Clemency of Titus) and die Zauberflote (The Magic Flute). Emanuel Schikaneder for the Theater-auf-der-Wieden commissioned the second work. By this time, however, the composer was ill, having suffered from fever and headaches for several mouths. He was also under the delusion that he had been asked to write the music for his own funeral."- Student Research Center Mozart finished 12 of the 15 sections to his last piece Requiem. It was up to his student Sussmayr for its completion. He passed away December 5, 1791. His wife had him buried in an unmarked pauper's grave. He left behind his wife, Constanze with two young children and the 600+ compositions he produced. ...read more.