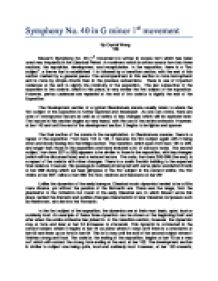 Mozart's Symphony No. 40 in G Minor Section B

Symphony No. 40 in G minor 1st movement By Crystal Wong 10S Mozart's Symphony No. 40 (1st movement) is written in sonata form which has been used very frequently in the Classical Period. A movement which is written sonata form has three sections, the exposition, development, and recapitulation. In the exposition, there is a "first subject", a theme that is established. It is followed by a transition section, with the end of this section marked by a general pause. The accompaniment in this section is more homophonic and is more by simple chords than in the previous subsections. There is use of imperfect cadences at the end to signify the continuity of the exposition. The last subsection of the exposition is the codetta, which in this piece, is very similar the first subject of the exposition. However, perfect cadences are repeated at the end of the codetta to signify the end of the Exposition. The Development section of a typical Classical-era sonata usually refers to where the first subject of the exposition is further explored and developed. As one can notice, there are uses of contrapuntal texture as well as a variety of key changes which will be explored later. The texture in this section begins as very heavy, with the use of the entire orchestra. However, at bar 140 and until the end of the development section, it begins to be lighter and sparser. ...read more.

The codetta, the ending of the exposition, begins at bar 73 as a very soft which will contrast the strong forte ending at the end, at bar 100. The development section is similar to subject one being quite, loud and suddenly loud. However, at bar 162 onwards, there is use of mezzo forte-piano, indicating a moderately loud dynamic before instantly diminishing to a much softer volume. The first subject of the recapitulation, adopts the dynamics of subject one in the exposition, which were the basic dynamics; piano, forte and sforzando. The bridge, or transition passage, is an overpowering section with loud dynamics. The second subject, as well, adopts similar dynamics to the relative subsection in the exposition. The coda starts off as forte in bar 293 and maintains this until the end of the passage. The exposition is introduced in its home key of G minor. However, from bar 22, F? has been dropped and the key starts to move towards relative major key of B?major. This key has been held until the end of the codetta where the end note has returned to the key of G minor. However, in between, there was been several chords that are played. For example, at bar 49, there is use of the circle of fifths, where the key has progressed from G7 to C to F7 to B?, despite still maintaining in the key of B?major. ...read more.

Of more significant note is the fact that Mozart does not use trumpets or drums, which was very unlike the typical Classical-era sonata. The woodwinds in the exposition section are rarely of any significance, except to provide a chordal accompaniment to the violins, which were playing the melody. However, during the second subject, they began to share parts of the melody with the stringed instruments and later at bar 52, the roles of the stringed and woodwinds were reversed. Despite playing alongside the violins at the end of the codetta, their role only increased during the development section. Right at the beginning of the development section, at bar 102, the woodwinds provide a link in order for the violins to be able to change keys. Their next role in the development section was to explore the first section, whilst the string instruments provide the contrapuntal texture. This is later reversed. Again, at bar 124, the woodwinds once again provide the chordal accompaniment to the string instruments. The use of imitation between the violins and the woodwind are seen in bars 138 to 141 and again in bars 143 to 145. The final recapitulation is similar to the exposition in terms of the use of woodwind instruments. It is however interesting to note that the three-note motif from the first subject is passed between the clarinet, bassoon and flute, whilst the first violins exchange the first two notes of the motif in augmentation with the violas and cellos. ?? ?? ?? ?? ...read more.

This is a well written essay with a lot of detail. I have concerns that the writer does not really understand how keys are explored in the Sonata. The writer talks about dynamics in a clear and accurate manner.