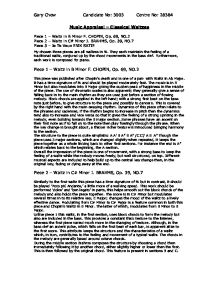 Music Appraisal - Classical Waltzes Piece 1 - Waltz in B Minor F. CHOPIN, Op. 69, NO.2 Piece 2 - Waltz in C# Minor J. BRAHMS, Op. 39, NO.7 Piece 3 - Je Te Veux ERIK SATIE My chosen three pieces are all waltzes in 3/4. They each maintain the feeling of a traditional waltz, conjured up by the chord movements in the bass clef. Furthermore, each work is composed for piano. Piece 1 - Waltz in B Minor F. CHOPIN, Op. 69, NO.2 This piece was published after Chopin's death and is one of a pair with Waltz in Ab Major. It has a time signature of 3/4 and should be played moderately fast. The music is in B Minor but also modulates into B Major giving the sudden peak of happiness in the middle of the piece. The use of chromatic scales is also apparent; they generally give a sense of falling back in to the main rhythm as they are used just before a section of flowing melody. Block chords are applied in the left hand; with a strong first beat on the bass note just before, to give structure to the piece and possibly to dancers. This is covered by the right hand with the main swaying rhythm. Dynamics of this piece often relate to the phrases and cadences, if the rhythm begins to increase in pitch then the dynamics ...read more.

Nevertheless, both of the other waltzes incorporate the different duration of a note throughout their piece, while Satie structures his to certain sections and keys. The tonality varies throughout the waltz as different key signatures are used for each new section. Although, I would say this piece was in C Major as the first and main section is composed in C Major. The structure of this piece is: ABA' /CDC/ ABA''. As I said section A is in C Major, section B is in G Major, section C is in F Major but modulates twice into Eb Major and section D is in Bb Major. This waltz has no apparent structure to tonality unlike the other two pieces. The structure has much repeating of the main 'section A' but also integrates new ideas with in each larger section i.e. ABA'. This feature is common to all three waltzes giving an interest to the waltz thus, giving a sensation of wholeness and relation to a previous section. Texture is not altered very often but when it is it does not last very long. Generally, the texture is, to an extent, thick with octave chords which are prominent in all parts; this is similar to Brahms' Waltz. These chords are used in both clefs but primarily in the bass clef and which fall on the first beat of each bar. ...read more.

* I decided not to accent the first note of a phrase as I thought it overpowered the rest of the piece. However, I accented the first note in the last section as an accent was suitable here, as it led to the end of my piece. * I included chromatic scales in my composition, though not as many as seen in Chopin's Waltz in B Minor. The chromatic scales did give a sense of falling back into the main melody thus, achieving what I hoped. * As my composition was not as long as Chopin's I had to condense his structure and apply it to my work. I keep the idea of 3 main sections. The structure to my waltz is: A A' B A'' /C D C/ A' B A'' This is a slight variation of the structure I wished to follow: A A' B A'' B A'' /C C'/ A B A' * I applied the idea of a flowing melody alongside a structure bass rhythm and I believe it worked rather well. * I interlaced most of the dynamic changes to suit the phrases and sections in my piece. * For the middle section I did the opposite to my set specification, which was to have a thick texture for the middle section. I decided I would have a thinner texture than the first section. This worked and allowed my entire composition to be balanced. ?? ?? ?? ?? Gary Chew Candidate No: 3003 Centre No: 28384 ...read more.