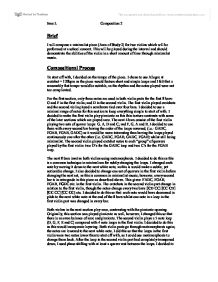 Brief I will compose a minimalist piece (Area of Study 2) for two violins which will be performed at a school concert. This will be played during the interval and should demonstrate the abilities of the violin in a short amount of time through minimalist music. Compositional Process To start off with, I decided on the tempo of the piece. I chose to use Allegro at crotchet = 120bpm as the piece would feature short and simple loops and I felt that a reasonably fast tempo would be suitable, as the rhythm and the notes played were not too complicated. For the first section, only three notes are used in both violin parts for the first 8 bars: G and F in the first violin; and D in the second violin. The first violin played crotchets and the second violin played a semibreve tied over four bars. I decided to use a minimal range of notes for this section to keep everything simple to start of with. ...read more.

Both violins in the next section play arco, contrasting with the pizzicato opening. Originally, this section was played pizzicato as well, however, I changed this so that there is an even balance of arco and pizzicato. The second violin plays a 5 note loop (D, G, F, E and C) compared with 4 note loops in the first violin. I decided to do this as this would incorporate layering. Both violin parts go through metamorphosis again; the notes are lowered to the next white note. I did this so that the loops in the first violin were two notes lower than to start off with, so I could use metamorphosis to change them back. After the loop in the second violin part had completely transposed down, I used phase shifting with at least a quaver rest between the loops. I decided to do this as this is another common feature of minimalism and I was interested to see what effect it would have on a 5 quaver loop against a 4 quaver loop. ...read more.

As these notes are next to each other pitch-wise, I thought this would be a good place to reintroduce the original loops. In bars 69-70, I decided to have patterns of repeating notes played around the note C in both violin parts: F, E, D, B, G, F, G, C. The piece ends on a perfect cadence, closing it. I decided to call the piece "Ping" due to the pizzicato sections which are abundant throughout the piece. Although the arco sections contradict the title, the piece starts pizzicato and can lead the listener to believe that the entire piece will be pizzicato. I feel that the piece met the brief as the two violins demonstrated pizzicato and arco throughout the piece, and that the violins showed the range that the violins can play: the lower range in the second violin and the higher range in the first violin. However, the piece may not be suitable to be played during the interval of a concert as the repeated semiquavers build up tension, when music played during the interval should be relaxing. ictl @ TheStudentRoom ?? ?? ?? ?? Ivan L Composition 2 ...read more.

This composition sounds well organised and makes excellent use of a number of minimalism techniques. I would have liked the writer to discuss how other elements of music contribute to the overall success of the piece.