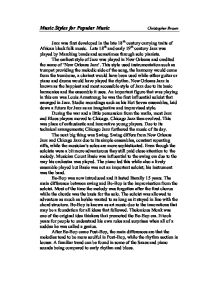 Music Styles for Popular Music Christopher Brawn Jazz was first developed in the late 18th century carrying traits of African black folk music. Late 18th and early 19th century Jazz was played by Marching bands and sometimes through solo pianists. The earliest style of Jazz was played in New Orleans and credited the name of 'New Orleans Jazz'. This style used instrumentation such as trumpet providing the melodic side of the song, the harmony would come from the trombone, a clarinet would have been used while either guitar or piano and drums would have played the rhythm. New Orleans Jazz is known as the happiest and most accessible style of Jazz due to its basic harmonies and the ensemble it uses. An important figure that was playing in this era was Louis Armstrong; he was the first influential soloist that emerged in Jazz. Studio recordings such as his Hot Seven ensembles, laid down a future for Jazz as an imaginative and improvised style. During the war and a little persuasion from the mafia, most Jazz and Blues players moved to Chicago. Chicago Jazz then evolved. This was place of enthusiastic and innovative young players. Due to its technical arrangements; Chicago Jazz furthered the music of its day. ...read more.

Acoustic Blues basically describes every type of blues that can be played on a non-electrical instrument, e.g. piano, banjo and mandolin. County blues was basically this but it used a range of guitar and music styles like folk, finger picking and ragtime. Leadbelly is a good example of Country blues. Leadbelly was the first blues musician to achieve fame amongst a whit audience. When he started an interest in music at a young age he had a lot of influences around him; post slavery and post reconstruction era in the late 19th century. Classic Blues was next up, this era was mainly dominated by woman singers during the 20's and mid 30's; singers such as Bessie Smith (the empress of the blues), and also Ma Rainey. After the City Blues cam along, Rock and Roll was developed. This was obviously developed primarily form the blues but also R&B and country. Other influences helped the structure create a danceable and catchy tune. Once other developed styles from rock and roll emerged for instance heavy metal and hard rock, traditional rock and roll slowly deteriorated from the pop charts. Elvis Pressley has to be the obvious target for this style. He's responsible for popularising rock and roll on an international level. ...read more.

One day it was too hot to dance to Ska due to its fast tempo beats so they slowed it down to create Reggae. Adventurous reggae artists such as 'Bob Marley' have influenced dance, folk and rock artists. Bob Marley is reggaes iconic figure and probably will be for a long time. Not only the fact that he made good music but he was the first Jamaican artist to achieve international stardom. His music described the day-to-day struggles of the Jamaican experience. Bossanova emerged in the 50's. The main artist behind this was Antonio Carlos Jobim; he created a mixture of Brazilian rhythms and melodies with improvisation. He played lightly and cool toned to create a smoothly tune. The obvious song for Jobin was ' Girl from Ipanema'; this was a huge hit. Disco was found in the 70's and probably long awaited. The beat was often emphasised the most out of the disco tunes even vocals. Once disco started getting noticed and artists were being signed up, it had a strong hand in the pop scene. Artists like Chic and the Bee gees were phenomenal in this era. Even though the Disco era faded out in the 80's it didn't die. Even new age styles for instance garage still has touches of disco in them and its just mutated into different styles like House, Trance, Hip Hop and also Pop. ...read more.