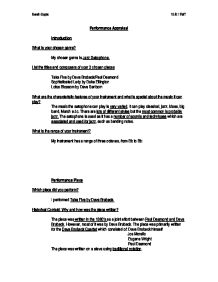 My chosen genre is Jazz Saxophone.

Performance Appraisal Introduction What is your chosen genre? My chosen genre is Jazz Saxophone. List the titles and composers of your 3 chosen pieces Take Five by Dave Brubeck/Paul Desmond Sophisticated Lady by Duke Ellington Lotus Blossom by Dave Sanborn What are the characteristic features of your instrument and what is special about the music it can play? The music the saxophone can play is very varied. It can play classical, jazz, blues, big band, March e.t.c. There are lots of different styles but the most common is probably jazz. The saxophone is used as it has a number of sounds and techniques which are associated and used for jazz, such as bending notes. What is the range of your instrument? My instrument has a range of three octaves, from Bb to Bb: Performance Piece Which piece did you perform? I performed Take Five by Dave Brubeck. Historical Context: Why and how was the piece written? The piece was written in the 1960's as a joint effort between Paul Desmond and Dave Brubeck. However, most of it was by Dave Brubeck. The piece was primarily written for the Dave Brubeck Quartet which consisted of: Dave Brubeck himself Joe Morello Eugene Wright Paul Desmond The piece was written on a stave using traditional notation. What is the style of the piece? The style of the piece is bluesy/jazzy and swung. What are the main features of the style? The main features of the style are a swung rhythm, a laid back approach and an atmosphere which gives a feeling of ease and relaxation. ...read more.

To begin with there is a major difference between Lotus Blossom and the other two pieces. The difference is that there is an improvising section in Lotus Blossom but not in the other two. Another is that the whole structure and style of Lotus Blossom is different from the other two. Take Five and Sophisticated Lady don't really differ that much from each other except that Sophisticated Lady is technically harder and uses a lot more technical features than Take Five. Another major difference is that Take Five and Sophisticated Lady are arrangements where as David Sanborn's piece, Lotus Blossom, is the original version. This is because Lotus Blossom was originally written for the solo alto saxophone whereas the other two weren't. Compare the performing techniques required in all three pieces In Take Five the performer needs to give the piece a feeling of being laid back but still an air of excitement. This can be achieved by playing the piece fast but fairly relaxed at the same time. Sophisticated Lady requires a much more slow and "ballady" feel with a lot of emotion. The B section has to be very expressive and fast feeling, not played faster but the way in which the performer makes it feel, and sound should make it sound excited. Lotus Blossom has to be a performance which comes from you as supposed to from the paper on which it is written. The improvising section is quite a large section of the piece and therefore is a very important part of the piece which the performer must give to the piece. ...read more.

How? My articulation of the top notes could have been improved a lot. I could improve this by using a better reed, tonguing better and hitting the reed in the correct place. I could have improved my tone, especially in the top register. I could also have improved my timing at the end of the B section as I was not entirely with the piano. This can all be improved by more practice by myself as well as with the piano. Was it technically fluent? The piece was technically fluent, I performed all the special effects well, I felt, such as staccatos and dynamics. One example of where it was particularly technically fluent is in bar 5 with the use if the glissando. Was it musically successful? Yes, I think the piece was musically successful. My phrasing was generally accurate and I think I managed to communicate the piece well throughout the entire duration of the piece although I felt it was better conveyed during the A section. The B section I found was a little jumpy and I didn't really communicate the piece as well as I possibly could. Do you think the performance was as the composer intended it? Why? Yes I do believe I played the piece as the composer intended because I followed all the composers directions; staccatos, dynamics and glissandos. As well as timings and speed. What special features in your performance made it effective and as the composer intended? The special features that made the piece as the composer intended is the things which Brubeck/Desmond wrote in as well as the way that I tried to convey the piece as I was performing it. Sarah Gupta 10.B.1 FMT ...read more.