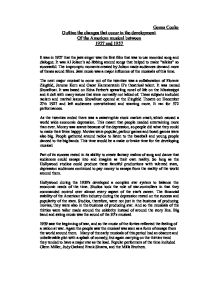 Genna Cooke Outline the changes that occur in the development Of the American musical between 1927 and 1957 It was in 1927 that the jazz singer was the first film that was to use recorded song and dialogue. It was Al Jolson's ad-libbing around songs that helped to make "talkies" so successful. The impromptu moments created by Jolson made audiences demand more of theses sound films. Jazz music was a major influence of the musicals of this time. The next major musical to come out of the twenties was a collaboration of Florenz Ziegfeld, Jerome Kern and Oscar Hammerstein II's theatrical talent. ...read more.

This meant that people needed entertaining more than ever. Money was scarce because of the depression, so people did what they could to make their lives happy. Movies were popular, parlour games and board games were also big. People gathered around radios to listen to the baseball and young people danced to the big bands. This time would be a make or brake time for the developing musical. Part of its success rested in its ability to create fantasy realms of song and dance that audiences could escape into and imagine as their own reality. So long as the Hollywood studios could produce these fanciful productions with talented stars, depression audiences continued to pay money to escape from the reality of the world around them. ...read more.

And so the musicals of the thirties were tailor made around the celebrity instead of around the story line. Big band and swing music was the sound of the 30's musical. 1939 saw the beginning of war, and so the music of the forties reflected the feeling of a nation at war. Again the people saw the musical was seen as a form of escape from the world around them. Many of the early musicals of this period had an obscure and unbelievable plot with a splash of comedy, but again carrying on the thirties trend they tended to have a major star as the lead. Popular performers of the time included Glenn Miller, Judy Garland Frank Sinatra, and the Mills Brothers. ...read more.