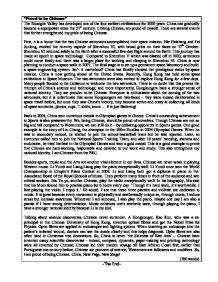 &quot;Proud to be Chinese&quot;The Huanghe Valley has developed one of the four earliest civilizations for 5000 years. China has gradually

"Proud to be Chinese" The Huanghe Valley has developed one of the four earliest civilizations for 5000 years. China has gradually become a superpower since the 21st century. I, being Chinese, am proud of myself. There are several events that further strengthened my pride of being Chinese. First, it is a honor that the two Chinese astronauts accomplished their space mission. Nie Haishang and Fei Junlong, excited the re-entry capsule of Shenzhou VI, with broad grins on their faces on 17th October. Shenzhou VI returned safely to the Earth after a successful five-day flight around the Earth. This journey has made an epoch in space technology. Compared to Shenzhou V which was blasted off in 2003, astronauts could move freely and there was a larger place for working and sleeping in Shenzhou VI. China is now planning to conduct a space walk in 2007. ...read more.

It is just flattering! Back to 2004, China won numerous medals in Olympiad games in Greece. China's outstanding achievement in Sports is also praiseworthy. We, being Chinese, should be proud of ourselves. Though Chinese are not so big and tall compared to Westerners, we can still do it - by defeating opponents in Sports games. One good example is the story of Liu Chang, the champion in the 100m Hurdles in 2004 Olympiad Games. When he was in secondary school, he wished to join the school basketball team but he was rejected. Later, an instructor called him to join the National Sports Training Team, and after 10 years' hardship, stamina and endurance, he tried his best in the Olympiad Games and won a gold medal. This is a good example to prove that Chinese are hard-working, responsible and devoted to our work and study. ...read more.

Maybe one day I am also a pianist if I have strong determination. Music enhances one's aesthetic taste, through playing the piano, I have a stronger national identity because Li is my idol. Talking about science discoveries, Chinese never surrender. A Hongkonger, Kao Kun, who was a ex-principal in the Chinese University of Hong Kong, invented optical fibres and got the Nobel Prize for Physics. Optic fibres are applied in endoscopes and lighting system. When inserting an endoscope into the patient's infected wound, doctors can see the inside clearly and this helps diagnosis. Optic fibres are also often used in Christmas tree decorations. So, China is never 'the Sickness of East Asia' - Chinese have invented many scientific discoveries - indeed, compass, dynamite, paper-making and printing technology were all invented by Chinese; Chinese led their maiden voyage till East African Coast first, earlier than Portuguese one century before. Chinese are pioneers of science; Westerners are followers and modifiers. So, I am proud of being Chinese. China, New Page, New Stage! (780 words) -The End- ?? ?? ?? ?? ...read more.