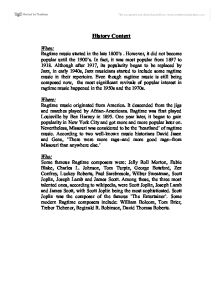 History Context When: Ragtime music started in the late 1800's . However, it did not become popular until the 1900's. In fact, it was most popular from 1897 to 1918. Although after 1917, its popularity began to be replaced by Jazz, in early 1940s, Jazz musicians started to include some ragtime music in their repertoire. Even though ragtime music is still being composed now, the most significant revivals of popular interest in ragtime music happened in the 1950s and the 1970s. Where: Ragtime music originated from America. It descended from the jigs and marches played by Afrian-Americans. Ragtime was first played Louisville by Ben Harney in 1895. One year later, it began to gain popularity in New York City and got more and more popular later on. Nevertheless, Missouri was considered to be the 'heartland' of ragtime music. According to two well-known music historians David Jasen and Gene, 'There were more rags--and more good rags--from Missouri than anywhere else.' Who: Some famous Ragtime composers were: Jelly Roll Morton, Eubie Blake, Charles L. ...read more.

Some of the famous Blues musicians in the 1920s were Bessie Smith, Lonnie Johnson, WC Handy, Ma Rainey and willie Johnson. In the 1930s, there was Robert Johnson. Some other well-known Blues musicians were Muddy Waters, Holin' Wolf, Charlie Patton, Albert King, John Lee Hooker and Jimi Hendrix. Ragtime versus Blues and Jazz Ragtime vs Blues - similarities and differences: To begin with, the first similarity between Ragtime and Blues is that they both have syncopation being the most recognisable feature. Additionally, they both have call-and-response melodies. Thirdly, they both have sections which are repeated throughout the pieces. However, there seems to be a lot more differences between Blues and Ragtime than similarities. Firstly, Ragtime uses piano only, while Blues uses a small band including: a singer, drums, trumpets, guitars,.. Secondly, while Ragtime has a weak beat, Blues has a emphasised and strong one. Moreover, Ragtime uses chromatic melodies, in which the notes ascend or the descend by semitones, whereas Blues uses the 12 bars blues. Additionally, Ragtime has dancelike, cheerful music which a generally fast tempo while Blues is used to tell stories and has a slow tempo. ...read more.

Moreover, the players would improvise a melody at the same time at this simultaneous improvisation would make it more interesting and give the music a fuller sound. Texture: There are three main types of textures in Jazz: +Homophony: In Jazz, it is an improvised solo part which is accompanied by a rhythm section. +Monophony: It is when a single melody has no pitched accompaniment. In Jazz, when a monophonic texture interrupts the usual texture, it is called a break. +Polyphony: It is when two or more melodies are played at the same time and none of those melodies sounds like the main melody. Rhythm: The main feature of the rhythm of Jazz is that it uses syncopation, meaning that the rhythm doesn't follow the beat. As Jazz developed from Ragtime, it shares the common feature of syncopation with Ragtime as well. Also, Jazz uses swing, which is the length of eighth notes. Swing in Jazz creates a momentum which makes you want to dance to the music. The final rhythmic feature of Jazz is counterpoint. Counterpoint is when several instruments are playing melodic lines at once, each with a different rhythm. ...read more.