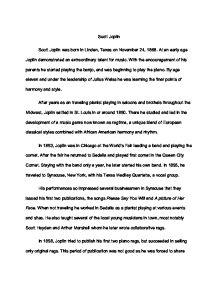 Scott Joplin was born in Linden, Texas on November 24, 1868. At an early age Joplin demonstrated an extraordinary talent for music. With the encouragement of his parents he started playing the banjo, and was beginning to play the piano.

Scott Joplin Scott Joplin was born in Linden, Texas on November 24, 1868. At an early age Joplin demonstrated an extraordinary talent for music. With the encouragement of his parents he started playing the banjo, and was beginning to play the piano. By age eleven and under the leadership of Julius Weiss he was learning the finer points of harmony and style. After years as an traveling pianist playing in saloons and brothels throughout the Midwest, Joplin settled in St. Louis in or around 1890. There he studied and led in the development of a music genre now known as ragtime, a unique blend of European classical styles combined with African American harmony and rhythm. In 1893, Joplin was in Chicago at the World's Fair leading a band and playing the cornet. ...read more.

Before Joplin published his next rag he obtained the assistance of a young lawyer. In August 1899, they contracted with Sedalia music store owner a publisher, John Stark to publish The Maple Leaf. Joplin published Nonpareil, Fig Leaf Rag, and Heliotrope Bouquet with Stark in 1907, but sought out new publishers for his other works in 1907, Searchlight Rag and Gladiolus Rag with Joseph W. Stern, and Rose Leaf Rag. In 1908 he self-published his ragtime manual School of Ragtime, but then turned it over to Stark and others to market it. His most significant new publisher became Seminary Music. Seminary issued Joplin's Sugar Cane and Pine Apple Rag in 1908, and in 1909 Wall Street Rag, Solace, Pleasant Moments, Country Club, Euphonic Sounds, and Paragon Rag. The last was dedicated to the C.V.B.A., the Colored Vaudeville Benevolent Association, an organization that he had just joined and with which he would be active during the next few years. ...read more.

By mid-January 1917, he had to be hospitalized, and was soon transferred to a mental institution where he died on April 1, 1917. In the 1970s as new recordings of Joplin's music, produced for the first time on classical labels, set classical sales records. At the same time, the notated music became available through reprinted collections, most notably a two-volume set issued by the New York Public Library, and Treemonisha was successfully staged, finally reaching Broadway. This quickly growing presence inspired a film director to use Joplin's music in his film The Sting, which became very popular and brought Joplin to the notice of the mass public. The result was unique in music history, led by music that Joplin had composed more than a half-century earlier, ragtime became a current and universally loved style. In recognition of his noteworthy achievements, the Pulitzer Committee in 1976 issued a posthumous award for Scott Joplin's contribution to American music. ...read more.