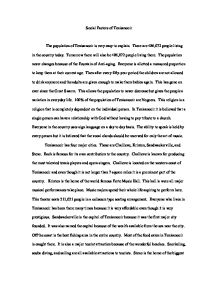 Social Factors of Tenisancoir The population of Tenisancoir is very easy to explain. There are 486,072 people living in the country today. Tomorrow there will also be 486,072 people living there. The population never changes because of the Fountain of Anti-aging. Everyone is allotted a measured proportion to keep them at their current age. Then after every fifty-year period the children are not allowed to drink anymore and the adults are given enough to make them babies again. This has gone on ever since the Great Swarm. This allows the population to never decrease but gives the people a variation in everyday life. 100% of the population of Tenisancoir are Nogoers. This religion is a religion that is completely dependent on the individual person. In Tenisancoir it is believed that a single person can have a relationship with God without having to pay tribute to a church. Everyone in the country uses sign language on a day to day basis. The ability to speak is held by every person but it is believed that the vocal chords should be reserved for only the art of music. ...read more.

It is also a major tourist attraction because of the wonderful beaches. Snorkeling, scuba diving, and sailing are all available attractions to tourists. Steno is the home of the biggest gathering of tennis courts in the world. In all there are 213 courts. Because Steno is located in the Tomaple Valley, it has the best conditions for tennis. Although these are not the only courts in the country, most people practice on these courts at one point or another. Tennis is not the only important aspect of life on Tenisancoir. Education is also highly valued. Education has gone through many steps in its assent to where it is right know. Since everyone in Tenisancoir has been through hundreds of years of education it is necessary for the teachers to keep finding new things to teach. Everyone in the country has the ability to speak German, Spanish, English, Latin, and Swedish. Everyone also has a doctorate in medicine and science. Music is a basis for education still because professors are working on news ways to create sound, and of course tennis strategies and aspects are still taught on a regular basis. ...read more.

On special occasions or when going to places like Forte Music Hall elegant dress is required and expected. Evening gowns and tuxedos are a must. Fruit and seafood is the basis of Tenisancoirerian food. No meat is ever eaten in the country(because it is considered cruel to eat other living beings), although there is a plant, mooplant, which resembles beef. Vegetables are also eaten but are not as popular as fruit. Apples, oranges, and mooplant are the most common foods. On holidays more care is taken to prepare these popular foods in ceremonial ways. Holidays celebrated in Tenisancoir are similar to those celebrated in the United States because the beliefs and practices are similar in Tenisancoir to thouse of the United States. Christmas, Halloween, Easter, Valentines Day, New Years Day, Earth Day, and St. Patrick's Day are all celebrated along with Tenisancoir National Tennis Tournament Month in August and Music Appreciation Week in April. Religious holidats resemble those of the Catholic religion but are practiced individually. All holidays are free to everyone in the country. No work is to be done and everyone participates in the day's festivities, which include festivels, parades, and parties. ...read more.