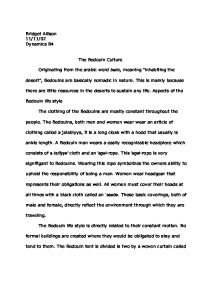 Bridget Allison 11/11/02 Dynamics B4 The Bedouin Culture Originating from the arabic word bedu, meaning "inhabiting the desert", Bedouins are basically nomadic in nature. This is mainly because there are little resources in the deserts to sustain any life. Aspects of the Bedouin life style The clothing of the Bedouins are mostly constant throughout the people. The Bedouins, both men and women wear wear an article of clothing called a jalabiyya, it is a long cloak with a hood that usually is ankle length. ...read more.

The Bedouin life style is directly related to their constant motion. No formal buildings are created where they would be obligated to stay and tend to them. The Bedouin tent is divided is two by a woven curtain called a ma'nad. The two sections each have their intended purposes. One of the sections, called the mag'ad, translated in arabic as "sitting place", is used for entertaining guests and recieving visitors. The other section is called ma'nad. This section is used for cooking and recieving women guests. ...read more.

When Bedouins have visitors, they honor their presence by greeting them and serve them spiced tea. "Visitors are also a cause for some festivity."(Sinai HP) These festivities include music, dancing and poetry. Bedouins are notorious for their music and their one-stringed violin called a rababa. Many Bedouins are musicians called shabbaba, the Bedouin term for a bard specializing in music. In conclusion, Bedouin culture is one forged by the environment and it's multi-faceted people. They are a people of traveling and music, and respect most of all. They honor both those who come and those who leave. Ironic that they seem most primitive to all Middle-Eastern cultures, yet they have some of the most righteous and honorable virtues. ...read more.