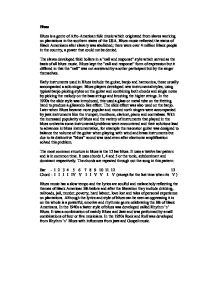 Blues Blues is a genre of Afro-American folk music which originated from slaves working on plantations in the southern states of the USA. Blues music reflected the status of Black Americans after slavery was abolished; there were over 4 million Black people in the country, a power that could not be denied. The slaves developed field hollers in a "call and response" style which served as the basis of all blues music. Blues kept the "call and response" form of expression but it differed in that the "call" was not answered by another participant but by the singer themselves. ...read more.

The slide effect was also used on the banjo. Later when Blues became more popular and moved north singers were accompanied by jazz instruments like the trumpet, trombone, clarinet, piano and contrabass. With the increased popularity of blues and the variety of instruments that played in the blues orchestra some instrumental problems were encountered and their solutions lead to advances in blues instrumentation, for example the resonator guitar was designed to balance the volume of the guitar when playing with wind and brass instruments but due to its distinctive "blues" sound was used even after electronic amplification solved this problem. ...read more.

Blues music has a slow tempo and the lyrics are soulful and melancholy reflecting the themes of black American life before and after the liberation they include drinking, railroads, jail, murder, poverty, hard labour, love lost and tales of personal experience on plantations. Although the lyrics and style of blues can be seen as oppressing it is on the whole is a powerful, emotive and rhythmic genre celebrating the life of black Americans. In the 1940s a faster style of blues was developed called Rhythm 'n' Blues. It was a combination of mainly Blues and Jazz and was performed by small combinations of four or five musicians. In the 1950s Rock and Roll was developed from Rhythm 'n' Blues with influences from jazz and Gospel music. ...read more.

This essay contains some useful information on the blues style although it is very disappointing that the 12 bar blues chord sequence has been annotated incorrectly as this is a very significant piece of information. There is some excellent use of musical vocabulary.