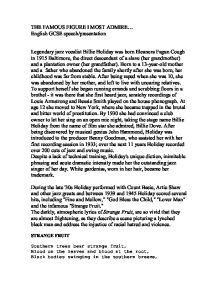 THE FAMOUS FIGURE I MOST ADMIRE... English GCSE speech/presentation Legendary jazz vocalist Billie Holiday was born Eleanora Fagan Cough in 1915 Baltimore, the direct descendant of a slave (her grandmother) and a plantation owner (her grandfather). Born to a 13-year-old mother and a father who abandoned the family shortly after she was born, her childhood was far from stable. After being raped when she was 10, she was abandoned by her mother, and left to live with uncaring relatives. To support herself she began running errands and scrubbing floors in a brothel - it was there that she first heard jazz, scratchy recordings of Louis Armstrong and Bessie Smith played on the house phonograph. At age 12 she moved to New York, where she became trapped in the brutal and bitter world of prostitution. By 1930 she had convinced a club owner to let her sing on an open mic night, taking the stage name Billie Holiday from the name of film star she admired, Billie Dove. After being discovered by musical genius John Hammond, Holiday was introduced to the producer Benny Goodman, who assisted her with her first recording session in 1933; over the next 11 years Holiday recorded over 200 cuts of jazz and swing music. ...read more.

In 1939, nearly two decades before the beginnings of the American Civil Rights Movement, Strange Fruit's performance sparked controversy (and sometimes violence) wherever Billie Holiday went. It was not until 16 years later that Rosa Parks refused to yield her seat on a Montgomery, Alabama bus. It was 25 years before Dr. Martin Luther King, Jr. led his famous march on Washington. Yet "Strange Fruit" with it's early open opposition to racism, had a fundamental effect on the face of jazz and music in general, -here was a song that foretold a social movement, and said so much about the woman who dared to sing it. Although by the mid-'40s Billie Holiday was addicted to heroin; somehow she continued to function well enough to perform constantly, becoming one of the best known jazz singers in North America. Nick-named "Lady Day", she built up a formidable reputation as a spirited vocalist, able to captivate audiences with her unusual phrasing despite her lack of formal training. Sadly, though Holiday was recognized as a brilliant performer, her personal life was a growing disaster. ...read more.

She sang Somewhere beyond the Sea, a song made known to younger generations by Pop Idol Winner, Will Young. Her comprehensive repertoire also includes old classics such as As Time Goes By (which was the theme tune for the same-titled comedy series starring Judi Dench), songs from the infamous opera Porgy and Bess, for example Summertime (which you may remember that Mrs Hunn gave us a lovely rendition of in assembly before she left 2 years ago) and Jeepers Creepers, on the soundtrack to the recent same-titled cult-teen horror film. Billie once famously said, "You can be up to your boobies in white satin, with gardenias in your hair and no sugar cane for miles, but you can still be working on a plantation." She is saying that even in these times when we can enjoy relative luxury and liberty, so many people are still not truly free of the shackles of an enslaved mind. This simple quote, for me establishes Billie Holiday as one of the precious few singers who do not sing for themselves, or for fame or fortune but for the knowledge that their words can touch people in a way that only music can. ...read more.