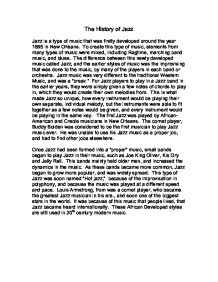 The History of Jazz

The History of Jazz Jazz is a type of music that was firstly developed around the year 1895 in New Orleans. To create this type of music, elements from many types of music were mixed, including Ragtime, marching band music, and blues. The difference between this newly developed music called Jazz, and the earlier styles of music was the improvising that was done to the music, by many of the players in each band or orchestra. ...read more.

This is what made Jazz so unique, how every instrument would be playing their own separate, individual melody, but the instruments were able to fit together as a few notes would be given, and every instrument would be playing in the same key. The first Jazz was played by African-American and Creole musicians in New Orleans. The cornet player, Buddy Bolden was considered to be the first musician to play Jazz music ever. ...read more.

As these bands became more common, Jazz began to grow more popular, and was widely spread. This type of Jazz was soon named "Hot jazz," because of the improvisation in polyphony, and because the music was played at a different speed and pace. Louis Armstrong, from was a cornet player, who became the greatest Jazz musician in his era., and soon one of the biggest stars in the world. It was because of this music that people liked, that Jazz became heard internationally. These African Developed styles are still used in 20th century modern music. ...read more.