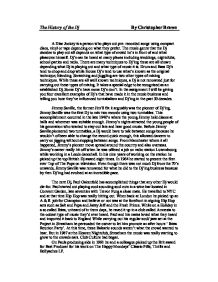 The History of the Dj

The History of the Dj By Christopher Brawn A Disc Jockey is a person who plays out pre- recorded songs using compact discs, vinyl or tape depending on what they prefer. The music genre that the Dj decides to play out all depends on what type of crowd he's in front of and what pleasures himself. Dj's can be heard at many places including weddings, nightclubs, school parties and radio. There are many techniques to Dj'ing these are all shown depending what Dj is playing out and what type of music it is. Drum and Bass Dj's tend to chop and drop while House Dj's tend to use what's known as the original technique; blending. Scratching and juggling are two other types of mixing techniques. While these are all well known techniques, a Dj is not renowned just for carrying out these types of mixing. It takes a special edge to be recognised as an established Dj. Some Dj's have some Dj's don't. In the assignment I will be giving you four excellent examples of Dj's that have made it in the music business and telling you how they've influenced turntabalism and Dj'ing in the past 30 decades. ...read more.

When back at London he picked up an A & R job for Champion and believe or not was at the forefront in signing Hip Hop acts such as Salt and Pepa and Jazzy Jeff and the Fresh Prince. While on a Holiday in a so called Ibiza, unheard of in them days, he raved it up in a club called Amnesia to the oddest type of music they'd ever heard. Paul and his mates loved what they heard and imported it back to England While carrying out his regular soul/ jazz set at the Project in Streatham he persuaded the owner to let him promote an after hours ' Ibiza Reunion Party'. At this time, these Balearic sounds weren't what the crowd wanted to hear. But in 1987 at the Heaven Nightclub, Streatham the music was really starting to grow to the crowds ears. Club Culture had began. On Pauls producing side in 1991 he and a colleague picked up the Brit award for Best Producer for his work on The Happy Mondays' Classic Pills, Thrills and Bellyaches LP. ...read more.

On his Dj forefront it seems that every young Dj or up and coming Dj wants to be like him, every set he does he seems to bring out new turntable and mixing tricks. The next Dj is D&B's Dj Hype. He has a confidence that's unbelievable when on the decks. He's a master at scratching and manipulating beats. To show this remarkable feat, he represented England in the 1989 DMC's Scratch masters comp. His roots as a Dj were of a Hip Hop and Reggae in the late eighties. He played on one of the most influential pirate stations of its time Fantasy Fm. Since then he's landed awards such as best Male Dj and Best Radio Dj in the 90's. He released his first public compilation 'Drum and Bass Selection'. But also compilations as Jungle Massive, which sold big due to Drum and Bass, bursting on the commercial circuit. Roni Size was a forefront figure of Drum and Bass' increasing popularity. Hype belongs to a D&B group and Label known as True Playaz including leading Dj's such as Zinc, Pascal and Rude Bwoy Monty. ...read more.