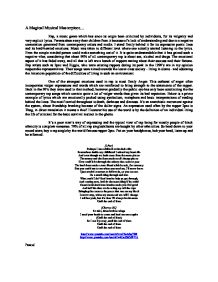 The magic of Rap

A Magical Musical Masterpiece... Rap, a music genre which has since its origin been criticized by individuals, for its vulgarity and very explicit lyrics. Parents shun away their children from it because of a lack of understanding and due to a negative connotation generated from contemporary artists and media. I stand firmly behind it for its expressive poetic lines and its hard-hearted emotions. Music was taken to different level where one actually started listening to the lyrics. Even the simple minded person could make something out of it. It is quite understandable that it has gained such a negative vibe; considering that about 90% of all contemporary rap is about sex, alcohol and drugs. ...read more.

Below is a prime example of lyrics which are emotionally packed using symbolism, metaphors and basic interpretations of reading behind the lines. The motif carried throughout is death, darkness and dimness. It's an anarchistic movement against the system, about friendship breaking because of the dollar signs. An expression used often by the rapper 2pac is Thug, in direct translation it means a thief. However his use of the word is by the definition of an individual living the life of criminal for the basic survival instinct in the ghetto. It's a poor man's way of expressing and the typical view of rap being for mostly people of black ethnicity is complete nonsense. ...read more.