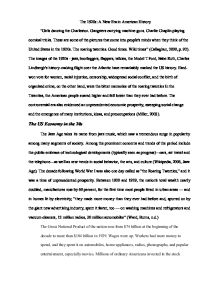 THE STATE OF GLOBAL GOVERNANCE ON TERRORISM

The 1920s: A New Era in American History "Girls dancing the Charleston. Gangsters carrying machine guns. Charlie Chaplin playing comical tricks. These are some of the pictures that come into people's minds when they think of the United States in the 1920s. The roaring twenties. Good times. Wild times" (Callaghan, 2000, p. 92). The images of the 1920s - jazz, bootleggers, flappers, talkies, the Model T Ford, Babe Ruth, Charles Lindbergh's history-making flight over the Atlantic have remarkably marked the US history. Hard-won vote for women, racial injustice, censorship, widespread social conflict, and the birth of organized crime, on the other hand, were the bitter memories of the roaring twenties In the Twenties, the American people soared higher and fell lower than they ever had before. The controversial era also evidenced an unprecedented economic prosperity, sweeping social change and the emergence of many institutions, ideas, and preoccupations (Miller, 2003). The US Economy in the 20s The Jazz Age takes its name from jazz music, which saw a tremendous surge in popularity among many segments of society. Among the prominent concerns and trends of the period include the public embrace of technological developments (typically seen as progress)-cars, air travel and the telephone-as well as new trends in social behavior, the arts, and culture (Wikipedia, 2006, Jazz Age). The decade following World War I was also one day called as "the Roaring Twenties," and it was a time of unprecedented prosperity. Between 1920 and 1929, the nation's total wealth nearly doubled, manufactures rose by 60 percent, for the first time most people lived in urban areas - and in homes lit by electricity; "they made more money than they ever had before and, spurred on by the giant new advertising industry, spent it faster, too - on washing machines and refrigerators and vacuum cleaners, 12 million radios, 30 million automobiles" (Ward, Burns, n.d.) ...read more.

The supporters of prohibition believed that alcohol consumption limited one's ability to participate productively in the new industrial society. Conversely, the opponents believed that an outdated moralism was responsible for Prohibition and argued that the changes of the past several decades, which they deemed to be progressive and objective, had rendered the morality of preindustrial America obsolete. (Davis, n.d.) By the end of the 1920s prohibition was regarded by most Americans as half scandal, half joke. The growing dishonesty and corruption made them lose respect both for the law and for the people who were supposed to enforce it. Prohibition was finally given up in 1933, though it had done the United States lasting harm, "it made law-breaking a habit for many otherwise respectable Americans. And gangsters remained powerful. Many used the money they had made as bootleggers to set up other criminal businesses" (Callaghan, 2000, p. 95). A high degree of racial and ethnic conflicts was also an integral part of the 1920s, the golden age of the Ku Klux Klan, which was basically based in the south of America. Here they targeted those set free after the American Civil War - the African Americans, which they have never considered as being free and terrorised Africa American families based in the South. Acording to Pavilion (2005), the Ku Klux Klan was were a violent organisation, since "white hooded KKK burnt churches of the black population, murdered, raped, castrated etc and they were rarely caught as most senior law officers in the South were high ranking KKK men or sympathetic with their aims - which was a white protestant south. On top of that, contrary to a popular belief, KKK did not target only the Blacks as "also hated were the Jews, Catholics, ...read more.