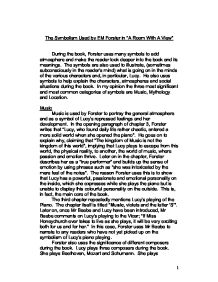 The Symbolism Used by EM Forster in &quot;A Room With A View&quot;

The Symbolism Used by EM Forster in "A Room With A View" During the book, Forster uses many symbols to add atmosphere and make the reader look deeper into the book and its meanings. The symbols are also used to illustrate, (sometimes subconsciously in the reader's mind) what is going on in the minds of the various characters and, in particular, Lucy. He also uses symbols to help explain the characters, atmospheres and social situations during the book. In my opinion the three most significant and most common categories of symbols are Music, Mythology and Location. Music Music is used by Forster to portray the general atmosphere and as a symbol of Lucy's repressed feelings and her development. In the opening paragraph of chapter 3, Forster writes that "Lucy, who found daily life rather chaotic, entered a more solid world when she opened the piano". He goes on to explain why, claiming that "The kingdom of Music is not the kingdom of this world", implying that Lucy plays to escape from this world, the physical reality, to another, the world of music, where passion and emotion thrive. Later on in the chapter, Forster describes her as a "true performer" and builds up the sense of emotion by using phrases such as "she was intoxicated by the mere feel of the notes". ...read more.

Mythology Forster uses mythological parallels in the book. The most significant of these is in chapter 6, when Lucy and several others go on out "in carriages to see a view". The driver of the carriage that Lucy is in is referred to as Phaethon and his girlfriend, who he pretends to the English is his sister, is referred to as Persephone. In Greek mythology, Phaethon is the son of Helios, the sun god. One day Phaethon is supposed to have borrowed his father's chariot. He drove quickly and carelessly and lost control of the chariot, causing havoc on earth, before he crashed and died. Forster refers to the cab driver as "a youth all irresponsibility and fire, recklessly urging his master's horses up the stony hill". By using this parallel, Forster is trying to make the driver sound more interesting and explain what he is like. He is very much like Phaeton; reckless, risky, careless and laid-back. The girl he picks up is described as Persephone, "tall and slender and pale". The fact that Phaeton represents recklessness and Persephone represents life and death, because, in mythology the god of the Underworld kidnapped her, to a degree represent Lucy's inner feelings and development. Lucy has the potential to be active and full of life but is, at that point in the book, closer to death because of her repression. ...read more.

The lake is also the place where Cecil told Lucy, who agreed, that she only ever sees him indoors and the place where Cecil fails in trying to kiss Lucy, mainly because he was uncomfortable with the surroundings and because he was nervous and somewhat uncomfortable with Lucy. George is completely different and is totally comfortable with nature and with Lucy. Gorge made the pool beautiful, "the pool had shrunk to its old size and lost its glory" the following day. In chapter 15, Lucy and George kiss again. They kiss inside the shrubbery, again associating George with nature. Chapter 18 is set at Windy Corner, which is described by Forster "Windy Corner lay, not on the summit of the ridge, but a few hundred feet down the southern slope, at the springing of one of the great buttresses that supported the hill." Windy corner is supposed to be ugly and look like a creation of nature, which implies randomness and disorganisation, much like the situation going on inside the house (the engagement is broken off in Windy Corner) and the music that Lucy is playing. Forster generally uses location and landscape to help explain the characters, atmospheres and social situations during the book. Forster's symbols work very well throughout the book and make the book seem very cleverly written. They also add a lot of depth to the book. 1 ...read more.