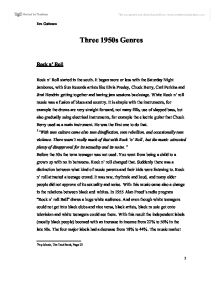 Three 1950s Genres Rock n' Roll Rock n' Roll started in the south. It began more or less with the Saturday Night Jamboree, with Sun Records artists like Elvis Presley, Chuck Berry, Carl Perkins and Jimi Hendrix getting together and having jam sessions backstage. White Rock n' roll music was a fusion of blues and country. It is simple with the instruments, for example the drums are very straight forward, not many fills, use of slapped bass, but also gradually using electrical instruments, for example the electric guitar that Chuck Berry used as a main instrument. He was the first one to do that. 1"With teen culture came also teen disaffection, teen rebellion, and occasionally teen violence. There wasn't really much of that with Rock 'n' Roll , but the music attracted plenty of disapproval for its sexuality and its noise." Before the 50s the term teenager was not used. You went from being a child to a grown up with no in betweens. ...read more.

The founder of Sun Records, Sam Phillips, discovered him when he came to his studio to record a song for his mother's birthday. The thing that Elvis was most known for was his swinging hips when he performed. Young women went crazy over it and the older people dissociated themselves from it. His songs, affected by blues, folk, and country became more popular as he got famous and more pop like with catchy phrases and melodies. The funny thing though, is that Elvis didn't write any of his own stuff. It was not so usual to do that in the popular music scene. When thinking about that, you could say that it is a bit unfair that he got to be so famous, while the songwriters who had really written the songs he sang, and probably were good artists, didn't get half of the fame and wealth that he got. He was a product, an image with good hips to woo his audience and make the big money for the record label. ...read more.

Soul 3"A Merger of gospel-charged singing" Soul music was created by Ray Charles and came out of fifties Rn'B. It was gospel music made secular. With famous artists like Ray Charles, Marvin Gaye and Sam Cooke, the use of church music and instruments like the Rhoades in clubs created a lot of controversy. However the soul music was blooming with these great black artists becoming a part of the mainstream music charts. Even with a price- with for example Sam Cooke using the alias name "Dale Cooke" to attract a white audience. With gospel music these artists were not so poplar, because it was not regarded nicely that a gospel singer would perform in clubs and taking the church music to the clubs, making it secular. Sam Cooke was one of the founders of soul music. He was even called "The King of Soul". While Ray Charles was screaming his voice sore when performing, Sam used a more soft approach with his voice. One of his many written hits was "You Send Me", is a classic example, with very light drums and a clear soft voice. ...read more.