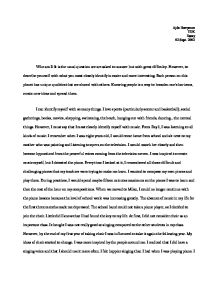 Ajda Berryman TOK Essay 02 Sept. 2002 Who am I? It is the usual question we are asked to answer but with great difficulty. However, to describe yourself with what you most closely identify is easier and more interesting. Each person on this planet has unique qualities that are shared with others. Knowing people is a way to broaden one's horizons, create new ideas and spread them. I can identify myself with so many things. I love sports (particularly soccer and basketball), social gatherings, books, movies, shopping, swimming, the beach, hanging out with friends, dancing... the normal things. However, I must say that I most closely identify myself with music. From Day 1, I was listening to all kinds of music. I remember when I was eight years old, I would come home from school and sit next to my mother who was painting and listening to opera on the television. ...read more.

At first, I did not consider choir as an important class. I thought I was not really good at singing compared to the other students in my class. However, by the end of my first year of taking choir I was influenced to take it again the following year. My ideas of choir started to change. I was more inspired by the people around me. I realized that I did have a singing voice and that I should use it more often. I felt happier singing than I had when I was playing piano. I started auditioning for honor choirs and performing in concerts, etc... Singing became a part of me. It has become the best way for me to express my thoughts, feelings, and emotions. It has healed me in times of sorrow and has brought a meaning into my life. ...read more.

The question every time I moved was, would I fit in? How was I supposed to act? Would people accept me for who I was or would I have to pretend to be someone else? What would the other people be like? Would I adapt into this new society quickly? Would people like me? These questions could only be answered when it was too late... when I was already there. I felt different though when I left Milan. After two years of experiencing choir and honor choir, those questions meant nothing to me. The only things I thought of were that I hoped people would be nice and that I would have lots of fun. I did not think of whether people would like me or not. So what if some people did not like me. There would be many who would. In general, my outlook on life became more positive because of music. Without music, I do not believe I would be who I am today. ...read more.

In summary the writer has written well about the subject matter. He writes in a very personal way which helps the reader identify with the writer. The biggest thing holding this essay back is the use of very short sentences and the over use of lists and repetitive questions.