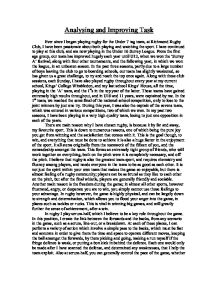 Analysing and improving task for rugby

Analysing and Improving Task Ever since I began playing rugby for the Under 7 tag team, at Richmond Rugby Club, I have been passionate about both playing and watching the sport. I have continued to play at this club, and am now playing in the Under 16 Surrey League. From the first age group, our team has improved hugely each year until U12, when we won the 'Surrey A' festival, along with four other tournaments, and the following year, in which we won the league, in an unbeaten season. In the past three seasons, partly due to a large number of boys leaving the club to go to boarding schools, our team has slightly weakened, so has given us a great challenge, to try and reach the top once again. Along with these club sessions, each Sunday, I have also played rugby throughout every year at my current school, Kings' College Wimbledon, and my last school Kings' House, all the time, playing in the 'A' team, and the 1sts in the top year of the latter. These teams have gained extremely high results throughout, and in U10 and 11 years, were captained by me. In the 1st team, we reached the semi-final of the national school competition, only to lose to the joint winners by just one try. During this year, I was also the captain of the sevens team, which was entered in various competitions, two of which we won. ...read more.

It will also make the defence take more care in defending the rucks, and so release some of the pressure they would put on the fly-half. Communication and Observation Throughout the game, the scrum-half must be one of the most vocal players on the pitch. From this position, he can see most of what is happening in the game, and needs to pass on any important information to the rest of the team. Forwards for example, can see very little when in a ruck or a maul, so need to be directed with constant instructions as to what to do. He also should guide them around, in the contact situation, as he can see far more from five yards back, so can notice overlaps, or gaps that need fixing. This is where the observation comes in for the scrum-half, who should be more aware of how both the attacking and defensive lines are set up, and so can help to rearrange something. This must also be used in attacking play, where the scrum-half plays a key role in deciding what to do, so needs to choose the right decision based on the observations you make. Strengths Passing As I mentioned, I believe that passing to be a key aspect of a being a scrum-half, and needs to be good for the backs to be able to perform at the best of their ability. ...read more.

This has meant that when I arrive at a ruck, the potential option to kick is not usually one of the first thoughts to go through my mind. It has also meant that I have not spent as much time practising and improving my kicking than other areas of the game. As a result my kicking is significantly weaker, but could definitely improve with more effort put into it. This would give me the option to help my team in attack, giving a small chip for the wing to chase, and in defence, clearing the lines and relieving pressure from the usual kicker. Tackling Technique The tackle is one of the roughest parts of the game of rugby, and so, a place where injuries are likely to happen, especially if the wrong technique is used. If I am making a head on tackle, or one from the players right, the I a fine, but when I come in for a tackle from the players left, my technique is extremely bad, and could result in a serious injury for me. When making this sort of tackle, your head should be behind the ball carriers legs, and the left shoulder should make the initial contact. As you can see from the image below, when coming into this tackle, I have used my right shoulder, which has put my head on the wrong side of his body. From this, a part of the body like the knee could quite easily hit my head and cause severe concussion. Improving My Weaknesses Acceleration ?? ?? ?? ?? ...read more.