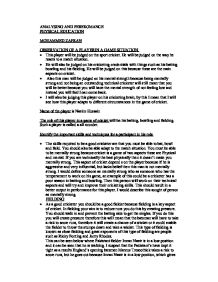 ANALYSING AND PERFROMANCE PHYSICAL EDUCATION MOHAMMED ZAFRAN OBSERVATION OF A PLAYERIN A GAME SITUATION. * This player will be judged on the sport cricket. He will be judged on the way he reacts to a match situation. * He will also be judged on his cricketing credentials with things such as his batting bowling and his fielding. He will be judged on this because these are the main aspects on cricket. * Also this man will be judged on his mental strength because being mentally strong and not being an outstanding technical cricketer will still mean that you will be better because you will have the mental strength of not feeling low and instead you will feel I can come back. * I will also be judging this player on his cricketing brain, by this I mean that I will see how this player adapts to different circumstances in the game of cricket. Name of the player is Nazim Hussain The role of this player in a game of cricket will be his batting, bowling and fielding. Such a player is called a all rounder. Identify the important skills and techniques for a participant in his role * The skills required to be a good cricketer are that you must be able to bat, bowl and field. You should also be able adapt to the match situation. You must be able to be mentally strong because cricket is a game of two aspects these are Physical and mental. If you are technically the best physically then it doesn't make you mentally strong. This aspect of cricket depend s on the player because if he is aggressive and very influential, but lacks belief then this man is not mentally strong. I would define someone as mentally strong who as someone who has the temperament to work on his game, an example of this could be a cricketer has a poor season in batting and bowling. ...read more.

I class this as strength because aggression and competitiveness is the key to success in sport. THE PARTICIPANTS WEAKNESS Although Nazim has many positive attributes he also has many negative attributes such as: * He does bowl a good length, but his bowling lacks variety because he doesn't seem to use his brain while bowling. This is the case because once Nazim finds a good length he carries on bowling it and after a while Nazim bowling becomes predictable and this is when the batsmen gets on top of him. When this happens he does try to change his line but it either becomes to short, which is a long hop (a really short ball can be hit anywhere). Or he bowls it to full, which makes the ball a full toss or a half volley these balls can be easily driven with no risk. 1. Nazim needs to practice different types of balls because by doing this it will add more variety to his bowling and it will make him less predictable. 2. He also needs to use his intelligence by bowling different lengths he can do this by practising these bowling lengths. * Nazim must make his run up smoother because he has a tendency of bowling no balls (When he over steps the white line). Due to him having a poor run up Nazim doesn't use the flexibility of his legs and he doesn't use his abdominal muscles. I say this because when Nazim bowls he doesn't get side on and he doesn't push his left leg up because by doing this he will be using his body efficiently and due to this he will also be using his muscles more efficiently and if he does this he will realise that his pace will increase. Although Nazim is a good bowler he doesn't have a built figure it is more like a skeleton figure. ...read more.

Due to this I would expect him to perform efficiently as a result the consistency should increase. Due to this player increasing his skill level through this training program I would expect him to become more at performing his skill. Due to this I would no longer class this player as a novice instead I would call him a semi pro because having these features is a great asset because it makes you a more intelligent sportsman because you will now know how to use your skills in the right way. I would also expect him to put in less effort and still get a desired outcome because now due to this training program this player would have learned skills which he couldn't do before as a result he will perform more efficiently with less effort. This is the case because as your skill level increases you could do things well without thinking and trying. I expect this to happen to this player. I would also expect him to have an increased level of fitness in muscular and cardiovascular endurance and strength. In this training program I specifically outlined these 3 because the player lacked these due to lack of stamina and having a skeletal build. By going for runs and doing weights in the gym and doing press ups and sit ups I would expect the player to build his muscular, cardiovascular endurance and his strength to increase. Due to a increase in strength I would also expect his body shape to change because due to this player doing press ups and sit ups and bench presses on the weight machine and squats I would expect him to become more pumped up. The only concern I have is that due to this player doing many cardiovascular training I expect him to lose weight and due to this the player may not see a change in his bodily shape although there is a small chance of this occurring. ...read more.