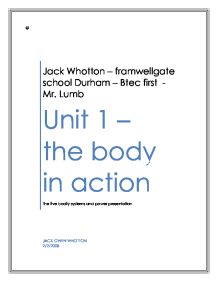 :) JACK OWEN WHOTTON 2/2/2008 Jack Whotton - framwellgate school Durham - Btec first - Mr. Lumb Unit 1 - the body in action The five bodily systems and power presentation The skeleton and its functions The skeletal system has many key functions behind its existence for example; It provides protection for the organs with such bones as the cranium, and the ribs. This is to make sure that when in an accident which could be related to sport or otherwise, the organs such as the lungs, heart and brain are all as well protected as possible. It also provides the body with movement this is done with the combined work between both the skeletal system and muscular system. For example an arm moves when the biceps contract and the triceps relax, this bends the arm upwards towards the shoulders. The skeleton provides the body with shape; this is in the form of bones such as the vertebral column and the pelvic bone. Without this structural element our bodies would simply look like a heap of skin tissue and muscle tissue on the floor, unable to move, unable to protect itself and unable to do pretty much anything. Structure and support; the skeleton provides an amazing amount of support for the vital organs within our bodies. ...read more.

Effects of exercise on bones and joints exercise Resulting effects Dumbbell lateral rise Builds both strength and muscle around the shoulders Chin ups Build upper body and arm strength around the shoulders and biceps Roman chair sit ups Builds lower back and abdominal strength also builds '6packs' 3 sporting Movements Movement Joints used Leg drawn back in preparation for kicking a football. Flexion at the knee Hinge joint Throwing a basket ball arm is flexed and then straightened Hinge joint Hitting a hockey ball arms are slightly flexed, arm is then fully flexed and then straightened Hinge joint Effects of exercise continued The skeletal system is affected in a more than beneficial way due to exercise. However these changes are dependent on the type of exercise participated. The skeleton has both long term and short term changes through exercise and strenuous participation. Short term changes include; * An increase in the production of synovial fluid Long term changes include; * An increased thickness in hyaline cartilage Joints Joints require motion to stay healthy. Long periods of inactivity cause the arthritic joint to stiffen. Also when a person participates in exercise the body moves at different speeds meaning the joints have to work harder than they do when resting; this extra stress on the joints causes the release of a fluid called synovial fluid. ...read more.

For example, when the quadriceps in the front thigh straightens the leg, the hamstrings in the back of the thigh relax. When the hamstrings contract to bend the leg, the quadriceps relaxes. Muscles which contract and relax in a co-ordinate movement are called antagonist pairs. Muscle contraction * Isometric contractions - when the muscle stays the same length * Concentric contractions - where the muscle shortens throughout movement * Eccentric movement - where the muscle lengthens throughout movement Effects of exercise on muscles Short-term short term changes are usually described as the responses to exercise, for example the short terms effects are; * An increase in blood flow due to the demand of oxygen needed y each muscle within and moving part of the body. * An increase in the demand of energy needed by a working muscle to complete an activity. * An increase in waste products due to the exercising of the muscles, E.g carbon dioxide, lactic acid. * An increase in body temperature due to the continued stress upon the muscles. Long-term long term changes are describes as bodily adaptations to regular exercise, for example the long term changes are; * Muscles adapt in both size and strength due to the consistent stress implied upon them. * An increase in muscle mass thus allowing movement to be quicker and more effective. Different types of activity using aerobic or anaerobic energy systems. anaerobic Aerobic 100m Basket ball long jump football ?? ?? ?? ?? ...read more.